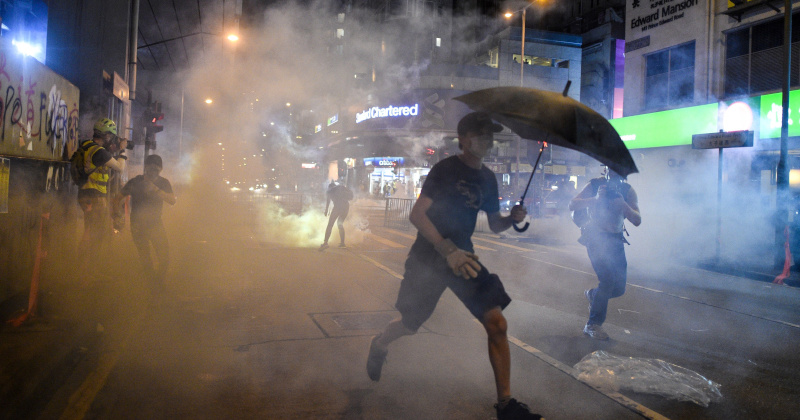 Hong Kong leader Carrie Lam has said that she won’t rule out intervention from Beijing to deal with protesters in Hong Kong.

She stressed that she believed Hong Kong should ‘find the solution’ itself.

In her weekly press conference on Tuesday, Hong Kong Chief Executive Carrie Lam said that Beijing agrees the island should reach a peaceful solution to ongoing mass protests without Chinese intervention, though she refused to rule out that option.

“At this point in time, I still strongly feel that we should find the solutions ourselves,” Lam said. “It is also the position of the central government [in Beijing] that Hong Kong should tackle the problem on her own.”

“But if the situation becomes so bad, then no options can be ruled out if we want Hong Kong to at least have another chance,” she added.

“I cannot tell you categorically now under what circumstances we will do extra things, including calling on the central government to help,” Lam told reporters.

In a joint press conference with the president of Finland, President Trump fought back against the narrative of the leftists attempting to plunge America into a hot civil war.

Sunday saw the first time that the Chinese military directly engaged with protesters, with personnel inside China’s People’s Liberation Army barracks in Hong Kong issuing a warning to protesters who shined laser pointers at the building.

Lam drew widespread criticism on Friday for invoking a colonial-era emergency ordinance to ban the use of face masks at public gatherings. However, in Tuesday’s press conference, she argued that other countries might have reacted with harsher sanctions than those she had implemented.

“Their measures wouldn’t be more lenient than ours, and perhaps would be more draconian,” she said.

Lam also said that she had no plans to introduce further measures under the emergency powers, and that her government would make a “careful assessment” before imposing any fresh measure, such as internet controls, under the law.

When asked whether the face mask ban had been a success, she said that it was too early to tell.

“I’m sure you’ll agree that for any new policy or new legislation, it will take time to be effectively implemented,” she said.

Over the weekend, thousands of people flaunted the ban, though only two have so far been charged in accordance with the new law: a male university student and a 38-year-old woman.

The ban is also in place in schools and universities, and teachers have been asked to report how many students are wearing masks as they return to class on Tuesday.

Lam’s remarks came after much of Hong Kong returned to work following a long holiday weekend, the so-called Golden Week.

However, Lam noted that visitor numbers “plunged over 50%” last week. Metro services did not return to full capacity on Tuesday after protesters over the weekend paralyzed transport links and other public services. Many restaurants and other businesses which should have been doing brisk trade for the public holiday closed early.

The view from inside. No escape from the tear gas as we pop into a restaurant to do some editing. #HongKong #HongKongProtests pic.twitter.com/2TIDvLZ2cf

ATMs, banks and many shops were vandalized by protesters. Two teenage protesters have been shot and wounded by police since the protests began four months ago. Rallies over the weekend descended into running clashes with police, who fired tear gas and used batons to disperse protesters.

The unrest began in June after the tabling of the controversial Chinese extradition bill. Although the bill has since been shelved, protesters remain dissatisfied with the state of affairs in Hong Kong, and protests show no sign of abating.

Lam is due to give a policy address next week but said on Tuesday that it would not be the “usual comprehensive” address, given the situation.

Trump has publicly declared that ties between corrupt elements of the Chinese government to our own officials should be investigated.