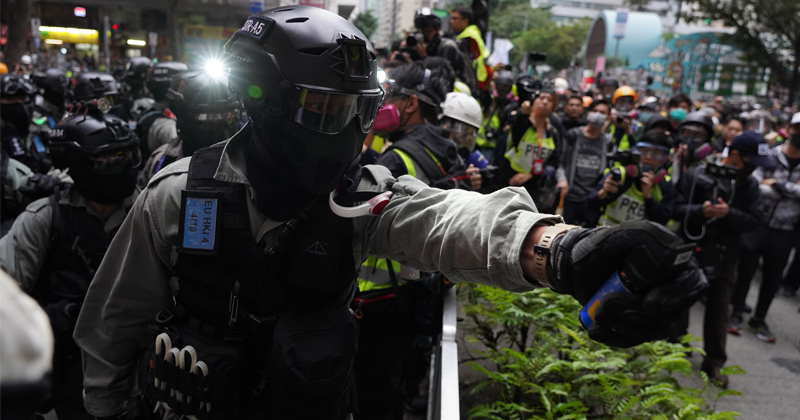 Activists and lawmakers have recently posed questions to Hong Kong authorities over their alleged “state-sponsored hacking” of cell phones seized from anti-government demonstrators over the past several months.

More than 3,700 cell phones were seized from demonstrators in Hong Kong between the months of June and November of 2019, according to data referenced by the city’s Secretary for Security John Lee during a Legislative Council meeting on Wednesday.

During that period, police processed 1,429 cases that involved “mobile phones as evidence,” he told lawmakers on January 8, as reported by the South China Morning Post. “Among those cases, 3,721 mobile phones belonging to arrested persons or suspects were involved, and the relevant cases were all processed with search warrants issued by the court.”

Lee asserted that such practices were commonplace and necessary to ensure the safety of the greater Hong Kong community.

Lee went on to say that in the case of cell phones and related electronic devices, a “digital forensic examination” is only conducted “after obtaining court warrants.”

Charles Mok, an IT entrepreneur-turned-legislator, pushed back against the idea that such searches were as by-the-book as Lee made them out to be.

“We are talking about 3,700-odd phones. That is a very big number. So far, police have arrested 6,000-odd people” in connection with the protests, the opposition lawmaker said.

“You break into the phones and read the contents, all contents, whether they are related to the cases being investigated or not. And no one will even know if the phones will be installed with spyware after being seized by officers,” he continued.

Concerns of spyware being installed on protesters’ cell phones were also brought up last month by Hong Kong pro-democracy activist Joshua Wong. The notable protest figure alleged that police had performed “state-sponsored hacking” on his iPhone following his August 30 arrest, as authorities used text messages from his phone as evidence in his trial, despite his declining to provide police with any passwords.

He also noted that he did not receive “any notice nor warrant for a search” of his phone.

2/ However, #hkpolice yesterday submitted an evidence list, which allegedly included 4 text messages of mine from iPhone XR. Police can even identify how the messages were sent out, whether it's from a mobile or desktop version of the app.


“Since such functions can’t be found on ordinary user interface, that can only be possible with the help of state-sponsored hacking,” he said in a December 19 Twitter thread, urging fellow demonstrators to strengthen their cybersecurity practices. “I doubt whether such a search is lawful. Now it seems state-backed hackers get involved in the crackdown on HK movement.”