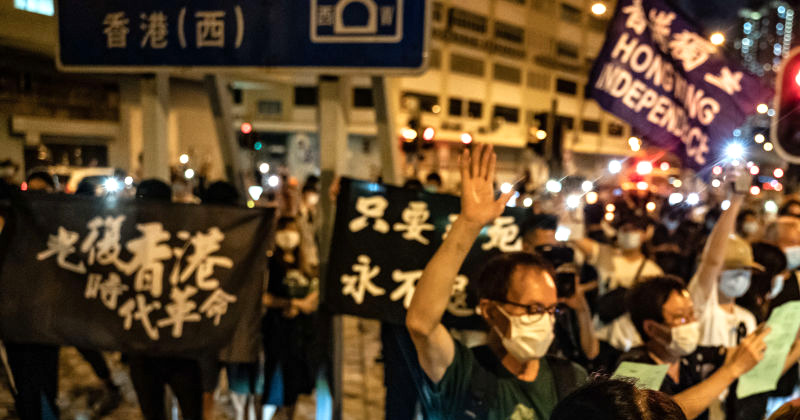 As we detailed this week activists are busy scrubbing their digital footprints, including deleting social media profiles and chat histories, given authorities can reportedly pry citizens’ online communications from internet companies without a warrant under the law.

But it’s not just college-age and ‘professional demonstrators’ and pro-independence organizers that have to worry, as now even schools have been ordered to review textual content in books. This means teachers and young students are coming under threat if they don’t visibly and “positively” conform.

Hong Kong’s Education Bureau this week announced that schools must review their own long in use education material, including books in classrooms and on library shelves, to ensure that no content which violates the law is present.

The bureau described this as part of an initiative to “positively teach” students regarding the new law. “In accordance with the four types of offences clearly stipulated in the law, the school management and teachers should review teaching and learning materials in a timely manner, including books,” the Education Bureau said.

“If they find outdated content or content that may concern the four aforementioned offences, they should remove them,” it added. This essentially hearkens back to 1930’s Germany book burning days.

And in a chilling statement which seems straight of a dystopian novel, the Education Bureau added: “As with other serious crimes or immoral behaviour that is not socially acceptable, materials should be removed and re-selected.”

China’s crackdown on Hong Kong gathered pace yesterday when pro- democracy books were removed from libraries and the authorities ordered schools and even nurseries to teach their pupils to obey the new national security law https://t.co/YOG9NAsBt7

Hong Kong has long prided itself as a city of free expression set apart from the overshadowing mainland. But it appears that’s changing fast, already as prominent anti-Beijing activists have begun fleeing the city, amid fears the national security law could be applied retroactively.

“Hong Kong has some of Asia’s best universities and a campus culture where topics that would be taboo on the mainland are still discussed and written about,” AFP noted, and added disturbingly: “But Beijing has made clear it wants education in the city to become more ‘patriotic’ especially after a year of huge, often violent and largely youth-led pro-democracy protests.”

Meanwhile, for the first time since Hong Kong reached its semi-autonomous status, a new Beijing security office has opened in the city, placing mainland Chinese law enforcement and intelligence agents there for the first time.