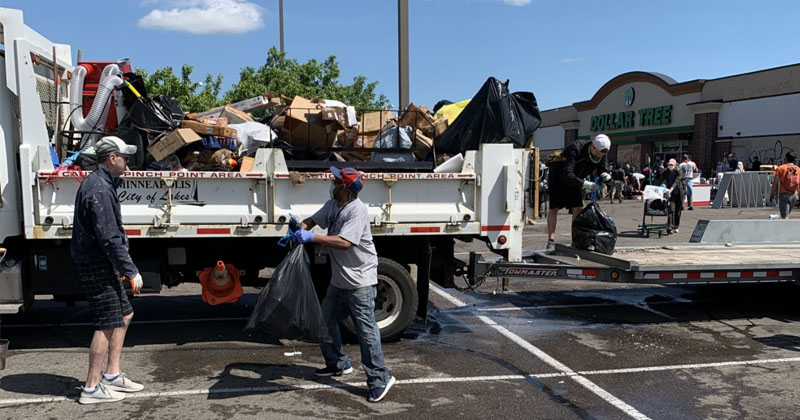 Hundreds of Minneapolis volunteers descended upon their leveled neighborhoods to clean up the destruction and debris left by rioters over the last few days.

Videos and photos out of the area show hundreds of volunteers sweeping, cleaning graffiti, and picking up trash on Saturday.

An ARMY of volunteers in Minneapolis helping neighbors clean up business damage. “Bring a broom” they were told. What a sight. pic.twitter.com/OjzXpEXCLk

Over 170 businesses in St. Paul and Minneapolis were left in ruins after thousands of rioters took to the streets to protest the death of George Floyd at the hands of police, which devolved into looting, violence, and mayhem.

“We have hundreds, possibly over a thousand volunteers out here with brooms, dustpans, shovels, ready to sweep up the streets and start cleaning from the chaos that ensued last night in this neighborhood,” one man said as he was recording.

Community volunteers are out on Lake Street this morning helping to clean up the damage. #Minneapolis #GeorgeFloyd pic.twitter.com/fLQ1nqHIZT

The community in South Minneapolis came together to clean today. But don’t expect any of the Main Stream Media to show you this part though. pic.twitter.com/6njuTL83St

However, judging by the videos and photos, it appears the American spirit of generosity and community is still alive and well despite globalist attempts to divide and conquer the people using race.

Helping cleaning up. Being a service in Minneapolis Minnesota.