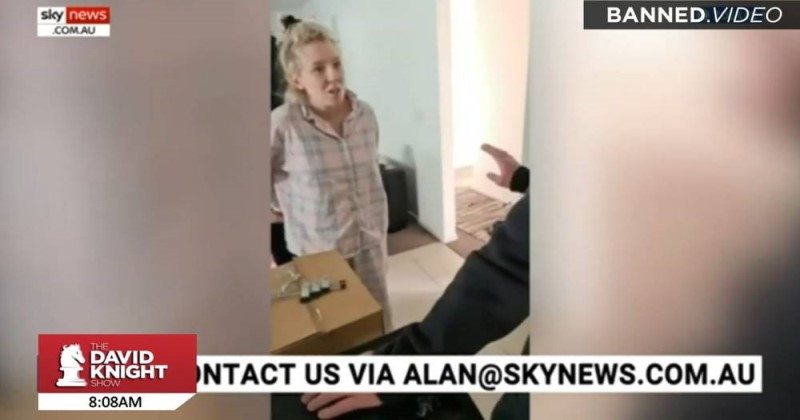 The shocking video of the 28-year-old being put in handcuffs in front of her two children is a highly visual example of the tyranny we’re seeing throughout the world.

On 9/2/2020’s show, David Knight reports, “If you want to see what’s coming to America with this health doc-tatorship just take a look at the draconian measures being taken in Australia. We have a breaking video of a 28-year-old pregnant woman being arrested and put in handcuffs in front of her children because of a Facebook post. It was live-streamed on Facebook and it’s gone viral. This is one of the most outrageous things I’ve seen.”

In the video, Australian police enter and begin searching the home of Zoe Buhler. The police tell her, “You’re under arrest in relation to incitement”

“Incitement? Excuse me? Incitement of what? What on earth? I’m in my pajamas.” She replied in clear bewilderment as they put her in handcuffs, “I have an ultrasound in an hour because I’m pregnant.”

She replied “Yeah, and I wasn’t breaking any laws by doing that.”

To which the officer replies; “You were, actually. You were breaking the law, that’s why we’re arresting you.”

The video ends as the police cease all phones and computers in the house including the phone her boyfriend was recording the video on.

Knight comments, “The background on this is, she was arrested for a Facebook post called ‘Freedom Day in Ballarat’. ‘Anyone from Ballarat please join us in our fight for freedom and human rights!’ Well, maybe they will now. Maybe now they’ve gotten the message.”

“No ‘Freedom Days’ in Australia, they’re going to be a penal colony again. The whole world is turning into a penal colony, that’s the globalist plan. They used China to model it and they use our politicians and media to push it,” continued Knight.

As visceral and disturbing as it is to see this kind of force used against a pregnant woman, just understand that here in America this lockdown is destroying the lives, the dreams, the jobs and the businesses of the middle class. You don’t see that, it’s not visceral, it’s invisible but it’s there.

As this is all happening we have our privileged Speaker of the House, Nancy Pelosi, having her staff contact a salon owner to set up an appointment. No one can get their hair done except for our queen and she wasn’t even wearing a face mask. Nancy Pelosi understands that this is a scam and you better understand that this is a crime. It’s not a mistake, it’s a crime.

“The salon owner, Erica Kious, who’s been shut down since March says, ‘I have been fighting for six months, for a business that took me 12 years to build, to reopen. I am a single mom, I have two small children, and I have no income.’”

“This is a single mother with two kids and they shut her business down. It’s a global agenda, there’s no difference between these people. They’ll go after a pregnant woman in Australia, and they’ll shut the businesses of single mothers in America. They’re both tyranny, you just can’t see one as clearly.”

“These orders are coming from both parties, from the Whitehouse to the Statehouses, from the governors, both Republican and Democrat, down to the little petty dictators.”

Kious went on to say, “It was a slap in the face that she went in, you know, that she feels that she can just go and get her stuff done while no one else can go in and I can’t work.”

Knight concludes, “The anger is bubbling up and they want that, they want you to fight each other. They want to make sure that nobody believes this election because they’re going to have a stupid lockdown election. All they’re doing is talking about how fraudulent it’s going to be. Both sides are already crying foul, both sides are ready to fight it in the streets. And that’s exactly what they want, they want us fighting each other instead of fighting these tyrants who are instituting this globalist plan.