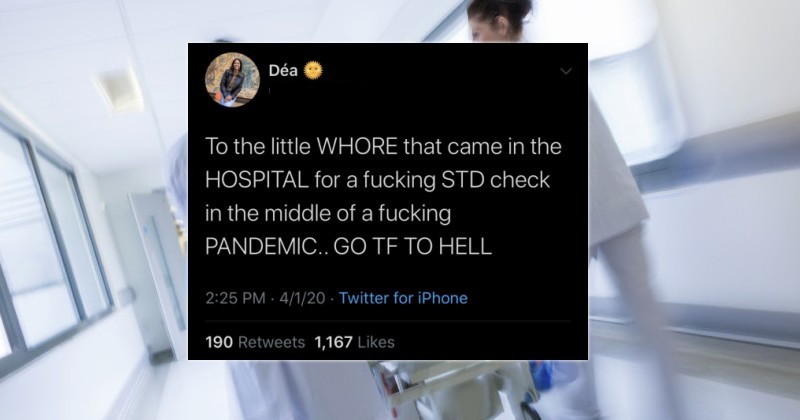 A woman who works in a hospital faced the fury of a Twitter cancel mob after she dared to suggest that people shouldn’t be visiting ER to get STD checks while nurses and doctors are overwhelmed with the coronavirus pandemic.

“To the little WHORE that came in the HOSPITAL for a fucking STD check in the middle of a fucking PANDEMIC.. GO TF TO HELL,” the woman tweeted. 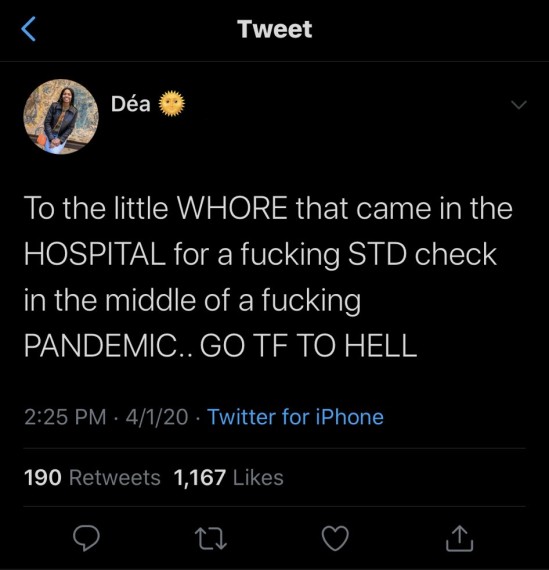 Despite being completely correct, she faced an immediate backlash from irate Twitter users who posted her employment details and tried to get her fired.

“Somebody drop a employer name or company or city or something bc this ain’t it at all,” said one respondent, receiving over a thousand likes.

“This is the HR contact for their place of employment,” responded another user with an accompanying screenshot showing the woman’s work address. “Hope it was worth it. the authorities are on their way.”

“What’s your job address?” asked another. “We all trying to see something? It’s gonna be terrible to be laid off on the brink of a recession.”

What’s your job address? We all trying to see something? It’s gonna be terrible to be laid off on the brink of a recession bih!

“She’s being hateful. And she probably shouldn’t be in any type of healthcare field if this is how she speaks about patients,” claimed another respondent.

The hospital worker initially stood up for herself, asserting in another tweet, “Y’all sound stupid lmao the hospital is for emergency situations. There are many other outlets where you can get non-emergent help. Like urgent care, your primary care physician, your OBGYN.”

However, after being bombarded with hate, the woman subsequently deleted her tweets and had to put her account into lockdown, so we have censored her Twitter name.

So apparently, according to the vast majority of respondents, it’s perfectly acceptable to go to the emergency ward for an STD check when nurses and doctors are completely overwhelmed with coronavirus victims.

And anyone who suggests otherwise is a hateful bigot who deserves to be cancelled.