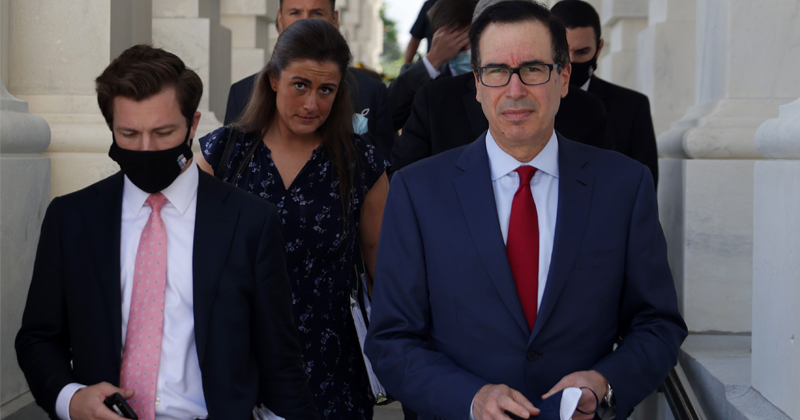 Just as Treasury Secretary Steven Mnuchin was sitting down for legally mandatory testimony before the Democrat-controlled House subcommittee investigating the federal response to the coronavirus pandemic, the committee tried to sandbag him by releasing a report alleging billions of dollars of “waste, fraud and abuse” in the $659 billion taxpayer-funded Paycheck Protection Program – or PPP.

According to the report, more than $1 billion of the money – a drop in the bucket, or a fraction of a percentage point – allegedly went to applicants that triggered red flags. These included receiving multiple loans – in violation of the program’s rules – or receiving loans despite having been disciplined for a given transgression.

$3 billion went to businesses that had been flagged as potentially problematic by the government.

At the same time, the program only doled out the full requested amount for 12% of black and hispanic-owned businesses.

For some of these “suspicious” cases, there might be perfectly reasonable explanations: perhaps a change of address, or a clerical mixup – it could be any number of things. But the Democrat-controlled panel found more than 600 examples where loans went to companies that had been barred from doing business with the federal government. Another 350 loans went to companies with past ‘performance problems’.

The subcommittee’s researchers found evidence that as few as 12% of Black and Hispanic business owners received the full funding they requested. The analysis examined data for more than 5.2 million ‘PPP’ loans worth some $525 billion that were doled out by banks in cooperation with theSmall Business Administration and the Treasury.

Outside their own research, the subcommittee noted that the SBA’s internal watchdog had also found “strong indicators” of potential PPP fraud.

Then again, even these flaws aren’t especially damning. As one reporter points out, the Dems latest attempt at crying “waste, fraud and abuse” rings hollow once again.

Two new subcommittee reports (D and R) on PPP today. Neither really backs up its claims.

Dems decry "waste, fraud & abuse) but the largest concrete example is $1b to cos w/ multiple loans (out of $500b in loans)


And while the Republican report referenced above may exaggerate the impact of the PPP, quibbling with Trump over exaggerated numbers is so a pretty superficial criticism.

While the Trump Administration talks its book by trying to pass off the 51 million number as credible factoid, the mainstream media has come up with its own set of specious figures.

The Trump administration says the PPP has saved some 51 million jobs at a time when much of the U.S. economy has been shuttered due to the coronavirus. Economists say the actual impact is far lower, likely between 1 million and 14 million jobs.

1 million jobs saved? That sounds like a lowball. Then again, the final tally isn’t really in yet, as we wait for the impact of the most recent fiscal cliff to reverberate across the economy.

At any rate, the Dems ulterior motive was laid bare by Committee Chairman Jim Clyburn during the opening minutes of Treasury Secretary Steve Mnuchin’s testimony Tuesday afternoon…just hours after Mark Meadows affirmed a new GOP plan calling for another $500 billion in spending to revive the enhanced unemployment checks.

.@COVIDOversight Chair @WhipClyburn to Sec. Mnuchin as today's hearing begins – "I hope you will return to the negotiating table prepared to find common cause on legislation that meets the pressing needs of American families and communities that are hurting from this crisis."


Comes as the Committee released a report earlier today showing what Dems called potential "fraud, waste, and abuse" in the implementation of the PPP loans – e.g. over $1 billion in loans going to companies that got multiple loans


So Dems are accusing the administration of “waste, fraud and abuse” to try and pressure them into approving even more wasteful spending…got it.

Facebook is censoring official CDC data that reveals COVID-19 is not nearly as deadly as first projected by the W.H.O. and Dr. Fauci.