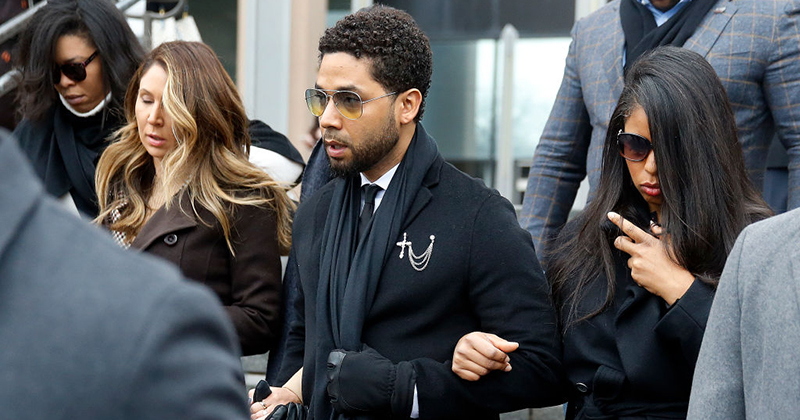 Jussie Smollett’s fake lynching was exploited by Democrats to get a bill passed to make broadly defined “lynching” a federal hate crime.

From the AP, “Congress makes lynching a federal crime, 65 years after Till”:

Sixty-five years after 14-year-old Emmett Till was lynched in Mississippi, Congress has approved legislation designating lynching as a hate crime under federal law.

The bill, introduced by Illinois Rep. Bobby Rush and named after Till, comes 120 years after Congress first considered anti-lynching legislation and after dozens of similar efforts were defeated.

The measure was approved 410 to 4 on Wednesday in the House and now goes to the White House, where President Donald Trump is expected to sign it. The Senate unanimously passed the legislation last year. It designates lynching as a federal hate crime punishable by up to life in prison, a fine, or both.

The AP failed to mention that 1,297 white people were lynched from 1882-1968 according to Tuskegee Institute archives.

They also failed to mention that the bill was sold as being in need of imminent passage because of the supposed “modern day lynching” of Jussie Smollett.

Senator Cory Booker (D-NJ), who co-sponsored the anti-lynching bill with Kamala Harris (D-CA) and Tim Scott (R-SC), argued for the legislation on the floor of the senate by citing the alleged attack on Smollett and insisting “lynching is not a relic of the past.”

The irony of this situation is that odds are the bill is actually going to be used disproportionately to prosecute black people.

The remarkably broad text of the House bill reads:

OFFENSES INVOLVING LYNCHING.—Whoever, whether or not acting under color of law, willfully, acting as part of any collection of people, assembled for the purpose and with the intention of committing an act of violence upon any person, causes death to any person, shall be imprisoned for any term of years or for life, fined under this title, or both.

Just this month, the Bureau of Justice Statistics released its 2018 survey of criminal victimization. According to the study, there were 593,598 interracial violent victimizations (excluding homicide) between blacks and whites last year, including white-on-black and black-on-white attacks. Blacks committed 537,204 of those interracial felonies, or 90 percent, and whites committed 56,394 of them, or less than 10 percent. That ratio is becoming more skewed, despite the Democratic claim of Trump-inspired white violence. In 2012-13, blacks committed 85 percent of all interracial victimizations between blacks and whites; whites committed 15 percent. From 2015 to 2018, the total number of white victims and the incidence of white victimization have grown as well.

Blacks are also overrepresented among perpetrators of hate crimes—by 50 percent—according to the most recent Justice Department data from 2017; whites are underrepresented by 24 percent. This is particularly true for anti-gay and anti-Semitic hate crimes. Only four house members had the character to vote against the bill in defense of our Constitution.

“The Constitution specifies only a handful of federal crimes and leaves the rest to individual states to prosecute,” [Rep Thomas Massie (R-KY)] told Newsweek in a statement. “In addition, this bill expands current federal ‘hate crime’ laws. A crime is a crime, and all victims deserve equal justice. Adding enhanced penalties for ‘hate’ tends to endanger other liberties, such as freedom of speech.”

Although [Rep Ted Yoho (R-FL)] said he’ll continue to condemn the “horrific act of lynching” and advocate for perpetrators to receive the “harshest penalty under the law,” the retiring congressman also felt the text took away too much power from states and was redundant.

“This bill today is an overreach of the federal government and encroaches on the principles of federalism,” the retiring lawmaker told Newsweek in a statement. “Hate crimes fall under the jurisdiction of states, which has led to 46 states producing various hate crime statutes. In my home state of Florida, these crimes are already under state government jurisdiction and are punishable up to death.”

[Rep Louie Gohmert (R-TX)] said on the House floor he would prefer that states penalize the guilty party for lynching so they can face capital punishment.

Kudos to these men for speaking truth in the face of the lynch mobs in our government and on social media.