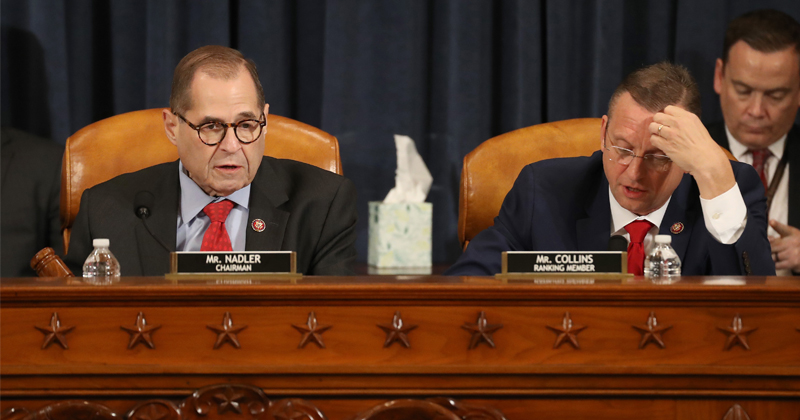 The Congressional Judiciary Committee has approved impeachment charges against President Donald Trump, with lawmakers largely sticking with their parties. The process could now advance to a full House vote as early as next week.

After debating two articles of impeachment in a heated session on Thursday, the committee voted to approve them.

A Republican amendment brought by Ohio Representative Jim Jordan to strike down the “abuse of power” charge was rejected by the judiciary committee earlier on Thursday after hours of debate, while Matt Gaetz, a Florida Republican, tried and failed to insert a reference to former Vice President Joe Biden’s son, Hunter, into the articles. Two additional GOP amendments were also shot down by the committee, one modifying the language of the articles, the other eliminating the “obstruction of Congress” charge entirely.

Over the course of the debate, Republicans argued it was the Democrats, not the president, who obstructed justice by refusing the GOP minority its own set of hearings in which it could call its own witnesses. Democrats say they invited President Trump to the hearing, where he could present his case, but the offer was turned down by the White House.

The majority really should hold themselves in contempt for conducting this one-sided biased impeachment investigation, and then attacking the White House for refusing to participate in such a patently unfair process.


The Democrat-controlled House launched the impeachment inquiry in late September after a White House whistleblower came forward with allegations of corruption linked a July phone call between President Trump and his Ukrainian counterpart, Volodymyr Zelensky. The whistleblower complaint – quickly seized upon by Democrats – charged that Trump tried to exploit US military aid in order to coerce Zelensky to open an investigation into Biden and the Ukrainian gas firm that hired his son.