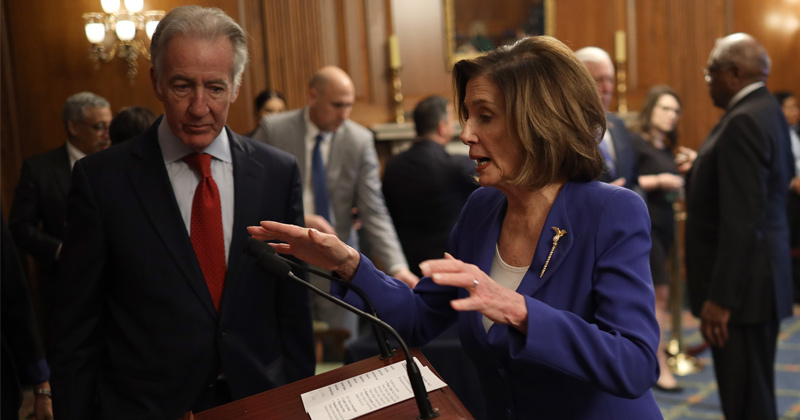 After holding up the process for over a week, the House has finally passed the $2 trillion coronavirus stimulus package via voice vote, despite a Republican lawmaker’s insistence that his colleagues go on record in favor of, or against the legislation.

It will be sent to President Trump’s desk next for his signature, where he will sign it ‘as soon as possible.’

The Senate had already passed the $2 trillion stimulus on Wednesday.

Leaders from both parties expressed a desire to quickly pass the legislation via voice vote – while aides suggested that the House could overcome objections and avoid a roll-call vote, according to the Wall Street Journal. Lawmakers who appeared sat far apart, spilling into the gallery typically reserved for the public.

With no quorum required, a GOP member’s demand for a recorded vote failed.

Via the Wall Street Journal:

The House was hoping to pass quickly a $2 trillion stimulus package despite a Republican lawmaker’s insistence that his colleagues go on record in favor or against the legislation, a vote that would delay passage.

Rep. Thomas Massie (R., Ky.) tweeted that he would object to a voice vote and try to force a formal roll-call vote, following a threat he had made a day earlier that sent lawmakers scrambling to get back to Washington in an effort to assemble the 216 members needed for a quorum. That threshold was reached Friday morning.

“I swore an oath to uphold the constitution, and I take that oath seriously,” Mr. Massie tweeted. “Is it too much to ask that the House do its job, just like the Senate did?” -Wall Street Journal

It’s pretty clear now, with enough members here to pass the bill, that Pelosi and McCarthy are still working together to block a recorded vote just to insulate members of Congress from ACCOUNTABILITY.

Biggest spending bill in the history of mankind, and no recorded vote? #SWAMP

Are they afraid of the truth? I’ve been told that they don’t even have 1 minute available for me to speak against this bill during the 4 hour debate. The fix is in. If this bill is so great for America, why not allow a vote on it? Why not have a real debate? #SWAMP