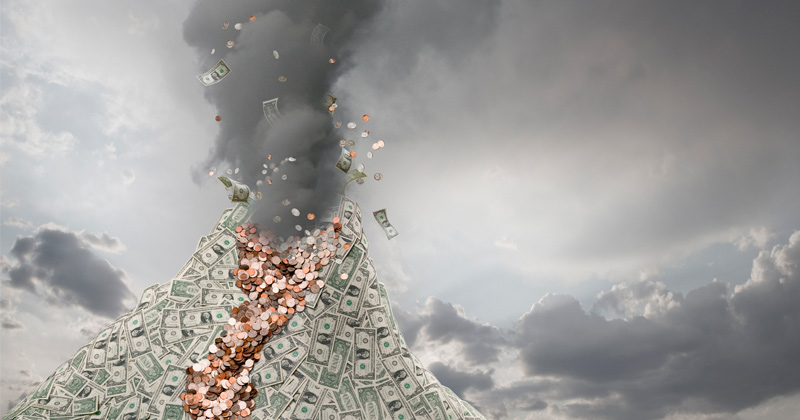 At this point in American history, it is now safe to say that the idea of “fiscal restraint” has become a quaint relic of the past.

The prevailing gospel in Washington, DC, is now to simply spend taxpayer money (and the money of future generations in the case of deficit spending) virtually without limit while insisting everything will be fine.

Consequently, the claim that “we can’t afford it” has ceased to really have much meaning anymore. Recent experience now suggests Congress can “afford” whatever it wants. All that is needed to rack up another 2 or 3 trillion in debt.

Not surprisingly, then, all those groups that have for years been told that their policies can’t be adopted because they’re “too expensive” will come out of the woodwork to demand some of the loot. Now that we live in a world where $500 billion is seemingly no big deal, surely “we” can afford to pay for whatever trillion-dollar plan various interest groups have been pushing for years.

One example of this is the movement for a universal basic income (UBI). Witnessing the profligacy of recent months, UBI advocates now want to make permanent the current “temporary” practice of sending out 150 million unconditional “stimulus” checks to Americans.

A second example is the reparations for slavery movement, now riding high on the popularity of Black Lives Matter. In the minds of some reparations advocates, now that political and legal limits on government spending are all but abandoned, it’s less and less convincing when reparations opponents claim “we can’t afford it.”

Earlier this month, for example, the proreparations Southern Christian Leadership Conference claimed that the latest round of bailouts and stimulus packages shows it is quite possible for the US government “to permanently extend monthly payments to the poor and to pay reparations for descendants of slaves.” The SCLC’s president, Charles Steele, has called the current round of stimulus a “start” but insists current levels of spending must be continued to address the needs of the nation’s poor. A multitude of posts on social media are now along the lines of sentiments expressed by one poster, who asked, “USA throwing 1.5 trillion at the banks but can’t pay black folks our reparations?”

Demands for reparations can range from a few hundred billion to trillions of dollars. But in light of today’s feverish spend-now-worry-later ethic, a trillion dollars might strike many as reasonable.

A History of Bigger and Bigger Bailouts

It’s easy to see why more and more people today are left wondering why they can’t get a bigger piece of the ever growing government bailout pie. But once upon a time, a request for even $100 billion would have been considered outlandish.

Back in 1995, for example, the US government put together a $50 billion bailout for investors affected by the 1994 peso crisis. At the time, this was considered an enormous amount of money. This was so much the case, in fact, that bailout architect Larry Summers later claimed that others assumed he meant “millions” when he said “billions.”

Nowadays, of course, a sum like $50 billion appears incredibly small and quaint. The Mexican bailout was just a small indication of what was to come years later. In 2008, the US government and the US’s central bank, the Federal Reserve, poured more than $700 billion into failing investment firms and other financial sector firms. Although these bailouts were cynically sold to the voting public as “loans,” the fact was that the bailouts were enormous wealth transfers that worked to preserve the wealth and power of government officials, billionaires, and investment bankers. This all came at the expense of smaller competitors and those who haven’t benefited from the incessant asset price inflation that resulted from the bailouts and previous rounds of easy money.

This sort of thing did not go totally unnoticed by the general public. It was becoming increasingly clear that the US government had no problem with unprecedented levels of money supply inflation, deficit spending, and government spending when done to support politically powerful firms and other political favorites.

In 2020, the bailout machine is now a permanent fixture of American politics. The US central bank, the Federal Reserve is now engaged in nonstop de facto bailouts through its asset purchases, funded by newly created money, to the tune of more than $7 trillion. Eventually, it becomes politically necessary to start sending out checks directly to residents.

The Role of the Central Bank and Deficit Spending

This has all been made possible by the fact that the central bank has essentially allowed the decoupling of government spending from the real economy. In a sustainable economy, government spending is directly tied to tax revenue. Deficit spending is limited by the fact that interest rates paid on government debt rise as more debt is issued. For the most part, if governments wish to spend more, they need to tax more. This, in turn puts political limits on spending, because taxpayers generally don’t like their taxes to go up. As Ludwig von Mises noted in Omnipotent Government:

The government has but one source of revenue—taxes. No taxation is legal without parliamentary consent. But if the government has other sources of income it can free itself from this control.

But the government now does have other sources of revenue. This revenue is indirectly provided by the central bank. While it is true the Fed does not directly provide funding to the US government, it does make large amounts of deficit spending far more feasible and sustainable than would be the case without the Fed. It does this by buying up US debt and other assets so as to keep interest rates low. And as long as the Fed can keep interest rates low, the US government can keep on issuing ever larger mountains of debt without the budget becoming overwhelmed by the need to pay immense amounts of interest on that debt.

The Fed largely does this by simply creating new money “out of thin air.” And as long as that continues, the US government can essentially increase spending without limit and without the need to increase the nominal tax rate. Yes, the public eventually pays for this money supply inflation in terms of both consumer price inflation and asset price inflation. But this mechanism works itself out largely out of the public eye, and few make a connection between deficit spending and, say, the fact that first-time homebuyers can’t afford to buy a home.

But as long as this mechanism appears to be working, much of the public will view another round of “stimulus,” or a slavery reparations program, as essentially costless. Need another $2 trillion for reparations? Just add it to the national debt.

This means programs like UBI and slavery reparations will begin to look increasingly feasible with every new trillion spent on yet another bailout or stimulus program.