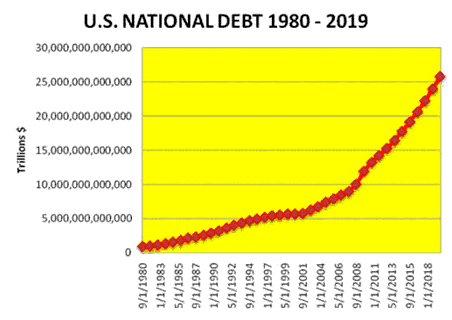 The US is in debt… A LOT of debt. The debt is so unimaginably large, that many Americans simply cannot fathom the scale of it, so they do not even try.

With this in mind, The Daily Signal decided to put together some statistics to illustrate this just how much of a problem the spiraling black hole of debt is.

The Signal notes that Floyd Mayweather, the highest paid athlete on the planet earned around $300 million in 2015 from an average of 2 fights per year.

By this reckoning, Mayweather would not only have to fight every day to eventually pay off the national debt, but he’d have to do it for 331 years.

That’s longer than the country has currently existed.

Green Bay Packers quarterback Aaron Rodgers is one of the highest paid professional football players in the country. On average, Rodgers earns around $1.29 million per game.

In order to pay off just one year of INTEREST on the national debt, Rodgers would have to play over 406 THOUSAND games of football. It’s a game a day for over 1100 years.

That’s a lot of football.

Taylor Swift, she’s a rich pop star – one of the highest earning on the planet. She earned a reported $80 million this year from 55 concerts. This means that Swift earned roughly $1,454,545 for every concert she performed. So, in order to pay off ONE DAY of INTEREST on the national debt, Swift would have to perform EVERY DAY for THREE YEARS.

We are never ever getting out of debt.

The Daily Signal throws in some big financial hitters to further illustrate the level of debt America has amassed.

Bill Gates, one of the richest men on the planet is worth an estimated $79.2 billion. This means that America would need 229 Bill Gateses in order to pay off the national debt.

No one wants to see that happen.

One would think that because the debt has gotten so out of control, there would be action in place to prevent it getting any worse.

Since Obama took office in 2008, the US has accumulated another $7.5 TRILLION in debt. That equates to a quarter of a million dollars EVERY MINUTE.

And as reported last week, the debt ceiling is expected to be lifted to $19.6 trillion through March 2017.

These sobering stats show just how out of control government spending is. In 1960, the national debt stood at a measly $500 billion.

The national debt is not going away any time soon. Not in your lifetime, not in your children’s lifetimes. And certainly not in Floyd Mayweather’s lifetime.