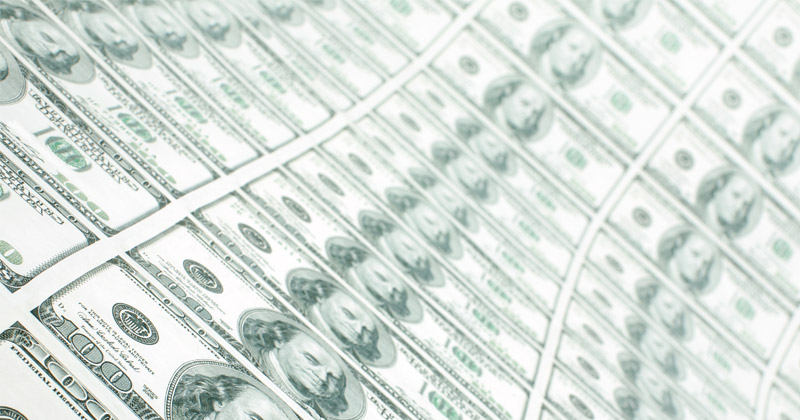 Most economists hold that a growing economy requires a growing money stock on grounds that growth gives rise to a greater demand for money that must be accommodated.

Failing to do so, it is maintained, will lead to a decline in the prices of goods and services, which in turn will destabilize the economy and lead to an economic recession, or even worse, depression.

Since growth in money supply is of such importance, it is not surprising that economists are continuously searching for the optimum growth rate in money supply. For instance, followers of Milton Friedman—also known as monetarists—want the central bank to target the money supply at a fixed percentage. They hold that if this percentage is maintained over a prolonged period, it will usher in an era of economic stability.

The whole idea that money must grow in order to sustain economic growth gives the impression that money somehow sustains economic activity. If this were the case, most Third World economies by now would have eliminated poverty by printing large quantities of money.

According to Rothbard in Man, Economy, and State,

Money, per se, cannot be consumed and cannot be used directly as a producers’ good in the productive process. Money per se is therefore unproductive; it is dead stock and produces nothing.

there would be an inevitable tendency for the less marketable of the series of goods used as media of exchange to be one by one rejected until at last only a single commodity remained, which was universally employed as a medium of exchange; in a word, money.

Through the ongoing process of selection people settled on gold as the general medium of exchange. Most mainstream economists, while accepting this historical evolution, cast doubt on the idea that gold can fulfill the role of money in the modern world. It is held that, relative to the growing demand for money as a result of growing economies, the supply of gold is not adequate.

If one takes into account that a large portion of gold mined is used for jewelry, this leaves the stock of money almost unchanged over time. It is held that the free market, by failing to provide enough gold, will cause money supply shortages. This, in turn, runs the risk of destabilizing the economy. It is for this reason that most economists, even those who express sympathy toward the idea of a free market, endorse the view that the money supply must be controlled by the government.

In a free market, in similarity to other goods, the price of money is determined by supply and demand. Consequently, if there is less money, its exchange value will increase. Conversely, the exchange value will fall when there is more money. Within the framework of a free market, there cannot be such thing as “too little” or “too much” money. As long as the market is allowed to clear, no shortage of money can emerge.

Consequently, once the market has chosen a particular commodity as money, the given stock of this commodity will always be sufficient to secure the services that money provides. Hence, in a free market, the whole idea of the optimum growth rate of money is absurd. According to Mises in Human Action,

As the operation of the market tends to determine the final state of money’s purchasing power at a height at which the supply of and the demand for money coincide, there can never be an excess or deficiency of money. Each individual and all individuals together always enjoy fully the advantages which they can derive from indirect exchange and the use of money, no matter whether the total quantity of money is great, or small….the services which money renders can be neither improved nor repaired by changing the supply of money….The quantity of money available in the whole economy is always sufficient to secure for everybody all that money does and can do.

However, how can we be sure that the supply of a selected commodity as money will not rapidly expand due to unforeseen events? Would this not undermine people’s well-being? If this were to happen, then people would probably abandon this commodity and settle on some other commodity. Individuals who are striving to preserve their lives and well-being will not choose a commodity that is subject to a decline in its purchasing power as money.

There Is No “Correct” Rate of Money Supply Growth

But even if we agree that the world under the gold standard would have been a much better place to live than under the present monetary system, surely we must be practical and come up with solutions that are in tune with contemporary reality. Namely, that in the world in which we presently live, we do have central banks, and we are not on the gold standard. Given these facts of reality, what must be the correct money supply growth rate?

We suggest that it is not possible, however, to devise a scheme for a “correct” money growth rate while central authorities have coercively displaced the market-selected money with paper money. Here is why.

How Paper Displaced Gold as Money

When paper certificates are accepted as the medium of exchange, the scope for fraudulent practice is widened. Banks could now be tempted to boost their profits by lending certificates that were not covered by gold.

In a free market economy, a bank that overissues paper certificates will quickly find out that the exchange value of its certificates in terms of goods and services falls. To protect their purchasing power, holders of the overissued certificates are likely to attempt to convert them back into gold. If all of them were to demand gold back at the same time, this would bankrupt the bank. In a free market, then, the threat of bankruptcy would restrain banks from issuing paper certificates unbacked by gold. On this Mises wrote in Human Action,

People often refer to the dictum of an anonymous American quoted by Tooke: “Free trade in banking is free trade in swindling.” However, freedom in the issuance of banknotes would have narrowed down the use of banknotes considerably if it had not entirely suppressed it. It was this idea which Cernuschi advanced in the hearings of the French Banking Inquiry on October 24, 1865: “I believe that what is called freedom of banking would result in a total suppression of banknotes in France. I want to give everybody the right to issue banknotes so that nobody should take any banknotes any longer.”

This means that in a free market economy, paper money cannot assume a “life of its own” and become independent of commodity money.

To prevent such a breakdown, the supply of paper money must be managed. The main purpose of managing the supply is to prevent various competing banks from overissuing paper certificates and from bankrupting each other. This can be achieved by establishing a monopoly bank—i.e., a central bank that manages the expansion of paper money.

According to Hoppe, “If one is to succeed in replacing commodity money by fiat money, then, an additional requirement must be fulfilled: Free entry into the note-production business must be restricted, and a money monopoly must be established.”1

It would appear that the central bank can manage and stabilize the monetary system. The truth, however, is the exact opposite. To manage the system, the central bank must constantly create money “out of thin air” to prevent banks from bankrupting each other. This leads to persistent declines in money’s purchasing power, which destabilize the entire monetary system. This tendency to destabilize the system is also reinforced by the fact that a money monopolist naturally has the incentive to look after his own interest. According to Hoppe,

He can print notes at practically zero cost and then turn around and purchase real assets (consumer or producer goods) or use them for the repayment of real debts. The real wealth of the non-bank public will be reduced—they own less goods and more money of lower purchasing power. However, the monopolist’s real wealth will increase—he owns more non-money goods (and he always has as much money as he wants). Who, in this situation, except angels, would not engage in a steady expansion of the money supply and hence in a continuous depreciation of the currency?2

Observe that while in the free market people will not accept a commodity as money if its purchasing power is subject to a persistent decline, in the present environment, central authorities coercively impose money that suffers from an ongoing decline in purchasing power.

Even Milton Friedman’s scheme to fix the money growth rate at a given percentage won’t do the trick. After all, a fixed percentage growth is still money growth, which leads to the exchange of nothing for something—i.e., economic impoverishment and the boom-bust cycle. It is therefore not surprising that the central bank must always resort to large monetary injections when various shocks pose a threat.

How long the central bank can keep the present system going is dependent upon the state of the pool of real savings. As long as this pool is still growing, the central bank is likely to succeed in keeping the system alive. But once the pool of real savings begins to stagnate, or, worse, shrink, then no monetary pumping will be able to prevent the plunge of the system.