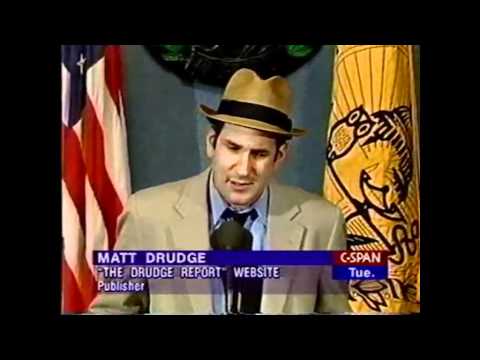 Despite refusal from major media organizations to cover the 63rd Bilderberg meeting in Telfs, Austria, this week, the public’s awareness of the annual gathering is greater than ever, thanks in large part to media pioneer Matt Drudge.

Since the group’s first gathering in Oosterbeek, Netherlands, in 1954, Bilderberg has benefited from its policy of strict secrecy, allowing it to operate unnoticed among other political summits.

Press outlets who once shunned and downplayed investigation of the group by independent media and muckraking journalists are now increasingly being forced to provide Bilderberg coverage.

Staying true to his historic words from his National Press Club speech in 1998, in which he predicted a waning-establishment media in the years to come, Drudge catapulted Bilderberg coverage to the forefront for the first time in 2010 by highlighting the work of Alex Jones’ Infowars and the few others operating outside of the state’s influence.

Bilderberg would take its first step out of the shadows that same year and officially launch bilderbergmeetings.org, offering a glimpse into an agenda once only obtained by sleuth journalists with inside sources.

With each passing year, coverage of the group has increased exponentially, much to the indignation of press teams seemingly tasked with discrediting even the slightest questioning of Bilderberg’s position in the world’s power structure.

A poll conducted by the Drudge Report in 2012 quantified the public’s changing opinions on Bilderberg, revealing a majority to find the group to be far more significant than previously believed. Of the more than 35,000 participants, nearly 85 percent indicated that Bilderberg in one form or another represented the “real power masters” of geopolitics.

“20 years ago, even five years ago… if you talked about this, the corporate presstitute media would say that it didn’t exist,” Alex Jones said while traveling to Bilderberg in 2012. “We have forced it out in the open thanks to Infowars.com, Jim Tucker, American Free Press and also DrudgeReport.com.”

As those very outlets continued coverage at the 2013 meeting in the United Kingdom, Bilderberg for the first time in its history was pressured to set up an unofficial press office, tasked with handling a deluge of protesters and voracious reporters.

“I think that there’s a lot of concern amongst the general public about the way this conference comports itself,” Guardian writer Charlie Skelton said at the time.

Speaking with The Awl that year, Jones noted increased public recognition as well and Drudge’s role in fostering interest.

“Drudge has helped break through the electronic Berlin Wall,” Jones said. “I think Drudge has been, after my show, the number one force of coverage.”

Fast forwarding to 2015, Bilderberg appears to be struggling with its newly-found celebrity status among everyday Americans.

While setting up the most unprecedented security presence in its history, consisting of 2,000 police, checkpoints and a 6-mile exclusion zone, a Bilderberg representative speaking with the Washington Times claimed the group welcomed the “general interest in the conference.”

With Bilderberg preparing to wrap up this weekend, the meeting’s future remains at a crossroads. Will the group allow transparency to shine through its ranks? Or will a façade of openness continue to overshadow its desire for undemocratic proceedings?

Regardless, independent media outlets such as Infowars and Drudge will continue picking up the rest of the corporate media’s slack.