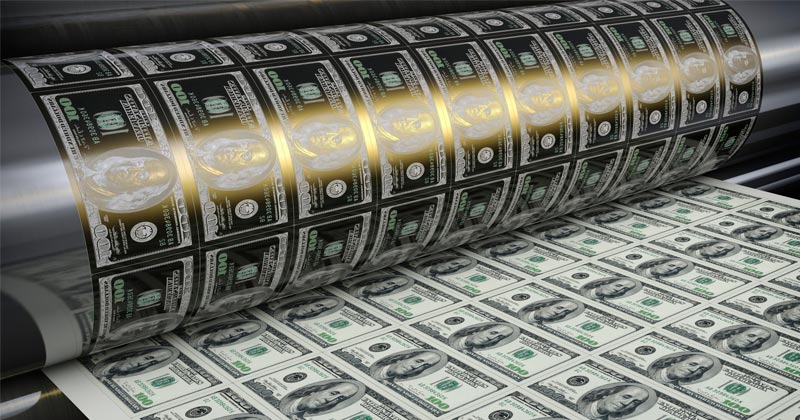 A counterfactual experiment helps us realize the enormity of the present situation.

What Could Have Happened

Suppose the COVID-19 pandemic had hit the globe under sound money, say a gold standard regime. In that counterfactual there would be no overhang of virulent asset price inflation, no Federal Reserve at the ready to embark on endless (and limitless) QE (quantitative easing) and zero rates, and no megaprogram feasible for guaranteeing corporate debt issues as determined by the realpolitik of crony capitalism.

Solvent governments enjoying global confidence in their commitment to uphold the convertibility of the national money into gold would be able to launch huge social insurance programs to mitigate personal economic hardship resulting from the pandemic. A key condition of that success: they must convince investors that remedial action to strengthen the public finances would follow the pandemic, meaning no resort to debasing the currency.

Countries which did not enjoy investor trust might have a harder job in expanding social insurance. In some cases, this would mean an immediate harsh spike in interest rates as the public rushed to convert currency into gold, triggering a decision to temporarily suspend the gold standard and engage in monetary financing of the deficits.

Even in the financially solid countries, concerns about debt quality, especially the liabilities of firms and households in the most stricken sectors, and spillovers to liquidity and solvency of banks, would trigger an increase in demand for high-powered money (banknotes, deposits at the central bank, and gold). The monetary authorities there, however, would have scope to increase the supply of nonmetallic high-powered money and so alleviate any shortage (avoid a sharp rise in money rates). The automatic mechanisms of the sound money order would operate to force the retirement of that emergency issuance once the immediate crisis was over. Action to thwart those mechanisms would undermine confidence in the continuation of the currency’s convertibility into gold.

Yes, there would be credit market tumult. Supply shock amplified by mandatory economic lockdown would mean that earnings plummet or turn into loss across much of the enterprise sector, most of all at the shock’s epicenter.

Under a sound money regime, however, the social contract of free market capitalism, whereby equity capital earns a risk premium on average over the long run in exchange for insuring other stakeholders, especially labor, to some extent against adverse shock (whether recession, change in taste, or natural disaster), would be honored. Accordingly, during the years of prosperity businesses would have built up large cushions of equity capital which could absorb the impact of shock.

Under unsound money, by contrast, where there has been long and virulent asset inflation in which financial engineers have succeeded in bolstering leverage, often in many camouflaged ways, so as to play on unleashed irrational forces (such as income famine investors following momentum), effective equity cushions are thin. This fact would be hidden from view during the peak of the asset inflation by sky-high valuations in the stock market, even when equity buyback programs were at their most aggressive.

In principle, where equity cushions are comfortable and natural disaster strikes, equity owners and creditors are in a position to negotiate a voluntary financial reconstruction from which all gain. The creditors are invited (by the equity holders) to exchange a share of their debt claims into equity. In consequence, the debt claims rise in price (from a fallen level that represents the debt impairment of the natural disaster). The equity owners gain (like the bond holders) from a reduced likelihood of bankruptcy and all its deadweight costs. This voluntary negotiation between equals cannot take place if leverage was already so high before the natural disaster struck that bankruptcy is in fact already in plain sight.

Even under sound money, the pandemic would lower the value of corporate equity in aggregate (and risky bonds)—but only by an amount which reflects the loss of earnings for the duration of the medical emergency. By contrast, where the preexisting condition is one of virulent asset inflation, multiple crashes occur, amplified by the eruption of credit crisis. Once popular, highly speculative narratives that yield-hungry investors accepted as truth, justifying the pursuit of aggressive credit carry trades and equity market strategies, suddenly lose their power to entice.

That was the situation when the COVID-19 pandemic struck. Leverage and credulity in highly speculative narratives had been running far above sober, rational levels. Hence the supply shock became the catalyst for the long and virulent asset inflation since 2012–13 to shift into a phase of bubble bursting. Paradoxically, though, the perpetrators of the asset inflation—the central bankers and the presidents or prime ministers who steered their course by appointments—get a clear pass. The crash is all the fault of COVID-19, stupid.

The cabal of neo-Keynesians, ex–private equity barons, and populists at the monetary policy command center devise a more radical “stimulus” than ever before in peacetime. By magic this is supposed to lessen the supply shock. With the Federal Reserve leading the way into unlimited government bond purchases and zero interest rates, all the limits present in the counterfactual gold market case are blown apart.

This is no temporary operation—it is for the long haul. The monetary “stimulus” is accompanied by massive government guarantee programs for selected corporations, allowing their debt to be purchased by the Federal Reserve.

All of this sets the stage for high inflation in the long aftermath of the pandemic, for crashes, and for recession. As a practical matter the v shape of supply shock followed by rebound superimposes itself on the great recession and subsequent recovery, which follows long and virulent asset inflation. The high inflation stems from a situation in which government debt outstanding has soared, with financially crippled firms populating large parts of the economy.

In no way would governments and their central banks raise rates from zero or cease manipulating long-term rates even if inflationary momentum were to develop. They will publicly deny that this momentum exists. Their story will be forever that evidence of high inflation is fleeting, that in any case inflation in recent years undershot target, and that vulnerable enterprises should not be imperiled by blind orthodoxy.

Why Should Inflationary Momentum Develop?

In our present unanchored monetary systems, this depends on unidentifiable monetary excess allowing prices to generally rise strongly without setting off any brake. With the vast amounts of capital investment of recent years effectively economically obsolescent (the reality of malinvestment), the supply side of the economy lamed by widespread financial crippling, and the nonmonetary disinflation force of globalization in retreat, the preconditions are all in place for high goods and services inflation to emerge.

Obsolescent human capital and the shrinkage of opportunity in sectors where low-paid workers could once find employment mean that inflation can take off at an aggregate unemployment rate that is strikingly high compared to recent history. Within that aggregate, some sections of the highly heterogeneous labor market will be very tight.

The monetary twin of goods and services inflation—asset inflation—will reemerge in strength but with new narratives (alongside some old surviving ones, most of all in big tech) and a different collection of epicenters from what we have become used to during the past decade and more. The skill needed to analyze these past, present, and future cycles is the same as what Balzac prescribed for the literary author—a capacity to both individualize types and typify individuals.