It apparently started with polls. 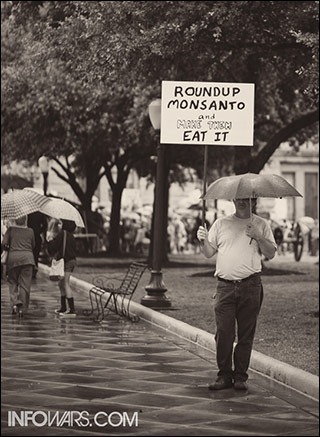 The question was, what message would resonate with voters?

The original pollsters (perhaps as early as 2011) tested all sorts of messages: “you have a right to know what’s in your food” was one of them.

Other messages were tougher. For example, they mentioned the effects of GMOs on health.

In every poll, the one message that came out far ahead was “you have a right to know what’s in your food.”

In 2012, the Mellman Group ran a poll for the group, Just Label It.. 91% of the 1000 voters surveyed said they wanted GMO labeling, which was interpreted as “consumers have a right to know what’s in their food.”

So that became the single mantra in California and the state of Washington, and the ballot measures in both places lost.

I have questions about the Mellman survey. Obtaining 91% agreement on anything under the sun should raise doubts. Who were the voters that were polled? What questions did the pollsters ask? How did they ask them? How many of the voters actually understood what GMOs are? Most importantly, how solid was that 91% when it came time for a barrage of TV ads during a political campaign?

Polls can test people’s reactions to bland questions, but these reactions give you no clue about how they would respond if the issue were presented forcefully.

For example, you could ask people, “Are you concerned that GMO crops will affect small farmers?” Assuming these people even understand the connection between GMOs and farmers’ livelihoods is a major stretch.

So the people say, “No, I’m not motivated by that issue.”

But suppose you ran a TV ad in which a salt-of-the-earth farmer was standing on a barren piece of land, the camera zoomed in on him, and he showed his callused and worn hands to the audience and said:

“I am an American farmer. I’ve been on this land forty years. My family has been on this land every day for a hundred and fifty years. I’m a human being just like you. My relationship with Monsanto and their genetically engineered food ruined my farm, my future, and my life…”

You could make that ad (conveying the truth) knock people off their couches.

Then, if you asked those television viewers whether they thought GMO food and farmers’ livelihoods was an important issue, you’d get a completely different answer.

On an issue like GMO food, polls don’t really tell the story.

Suppose you had this TV ad: a mother and her little child stand on their lawn in front of the camera. The mother says, “See the rashes and lesions on my son’s body? Do you know where he got them? From the weed killer we sprayed out of a bottle. It’s called Roundup. It’s made by Monsanto. Do you want this for your child?”

You’ve got the beginning of a powerful and true piece of information, delivered in a way that goes beyond the impact of any poll question about chemicals and food.

Unfortunately, the men who bankrolled Prop 37 and 522 in CA and WA took the poll data at face value. They settled for “the right to know what’s in your food” and stopped there.

They thought they had a winner, the only winner.

They need to go back to the drawing board. They have to knock off those bland TV ads they ran in CA and WA and realize they have the opportunity to achieve something much greater.

They can show people the truth about Monsanto and cause the kind of outcome they’ve been hoping for.

If they have the courage for that kind of fight.

GMO labeling alone is not going to add up to a victory in the struggle against Monsanto. Some proponents of labeling admit this. They say, “But you see, we’re educating people about GMOs in the process.”

Well, do you want to really make an impact on people or do you just want to mess around? If you’re serious, forget the polls and the pollsters. Start producing TV ads that bite. Bite hard.

Use your money to detonate a real explosion in consciousness.

Here is the bottom line. The issue of food has two sides. On the one hand, you build an alternative universe in which people grow and sell and buy food that is sustaining and healthy. On the other hand, you attack the criminals who are degrading and poisoning the food supply.

One without the other doesn’t work.

TV ads must, and I mean must, attack Monsanto and the other big food-tech giants.

Gary Hirshberg, the CEO of Stonyfield Organic, is a founding partner of the Just Label It group which commissioned the Mellman poll. Of all the leaders in the labeling movement, Hirshberg is the most overtly political.

During the 2008 presidential campaign season, his home in New Hampshire was a mandatory stop for candidates. Hirshberg’s first choice for the Democratic nomination was Tom Vilsack until he dropped out of the race. Hirshberg hosted gatherings for John Edwards and Barack Obama, and eventually decided to support Obama.

Vilsack, of course, became the Secretary of Agriculture under President Obama. Vilsack is a staunch supporter of GMO food. During his term as governor of Iowa, Vilsack was given a Governor of the Year award by the Biotechnology Industry Organization.

Vilsack was an odd choice for Hirshberg to support for president, to say the least.

Hirshberg is the author of Stirring It Up: How to Make Money and Save the World. It’s safe to say he views revolution-by-the-consumer as an exceedingly powerful force.

I’m sure the Mellman poll confirmed his position that “right to know what’s in your food,” and GMO labeling, could tilt the marketplace against Monsanto.

It may be pretty to think so, but giving American consumers a clear choice about whether to buy GMO or non-GMO food, through labeling, isn’t, all by itself, going to push Monsanto up against the wall.

For that, an all-out attack is necessary. And it doesn’t doesn’t take a genius to pick the medium: TV ads.

The objective? To make Monsanto’s threat to health and life and liberty very real and very personal. To make that threat as imminent as it was when millions of students, in the 1960s, saw the military draft as their ticket to going to Vietnam to die.

After you’ve aired a few thousand plays of such attack ads against Monsanto, then you can do polls. Then you’ll see what people believe and think and feel in a new light.

Hirshberg serves as a co-chairman of an organization called AGree. Its objective is to “build consensus around solutions” to “critical issues facing the food and agriculture system.” As researcher Nick Brannigan has pointed out, AGree includes, among its foundation partners: the Bill and Melinda Gates Foundation, the Ford Foundation, and the Rockefeller Foundation.

It would be hard to find foundations more friendly to big corporate agriculture and GMOs. No doubt Hirshberg would say somebody has to walk into the lions’ den and try to change the system from the inside.

If that is his mission, it’s not surprising that he would support watered-down political ads that encourage GMO leveling, while failing to make a deeper impact on the public mind.

The labeling movement should be enlisting artists of all kinds to make ads that move people, that attack the poisoners of the food supply, that hold up to ridicule the corporate agenda of monopolizing and degrading the food of this planet.