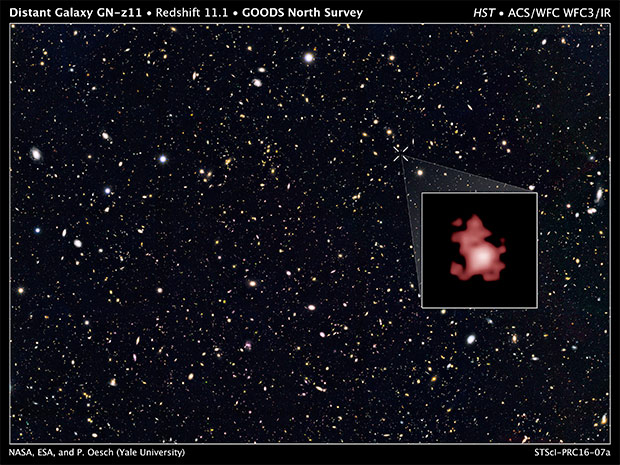 By pushing NASA’s Hubble Space Telescope to its limits, an international team of astronomers has shattered the cosmic distance record by measuring the farthest galaxy ever seen in the universe. This surprisingly bright, infant galaxy, named GN-z11, is seen as it was 13.4 billion years in the past, just 400 million years after the big bang. GN-z11 is located in the direction of the constellation of Ursa Major.

“We’ve taken a major step back in time, beyond what we’d ever expected to be able to do with Hubble. We see GN-z11 at a time when the universe was only three percent of its current age,” explained principal investigator Pascal Oesch of Yale University in New Haven, Connecticut. The team includes scientists from Yale University, the Space Telescope Science Institute (STScI) in Baltimore, Maryland, and the University of California in Santa Cruz, California.

Astronomers are closing in on the first galaxies that formed in the universe. The new Hubble observations take astronomers into a realm that was once thought to be only reachable with NASA’s upcoming James Webb Space Telescope.

This measurement provides strong evidence that some unusual and unexpectedly bright galaxies found earlier in Hubble images are really at extraordinary distances. Previously, the team had estimated GN-z11’s distance by determining its color through imaging with Hubble and NASA’s Spitzer Space Telescope. Now, for the first time for a galaxy at such an extreme distance, the team used Hubble’s Wide Field Camera 3 to precisely measure the distance to GN-z11 spectroscopically by splitting the light into its component colors.

Astronomers measure large distances by determining the “redshift” of a galaxy. This phenomenon is a result of the expansion of the universe; every distant object in the universe appears to be receding from us because its light is stretched to longer, redder wavelengths as it travels through expanding space to reach our telescopes. The greater the redshift, the farther the galaxy. 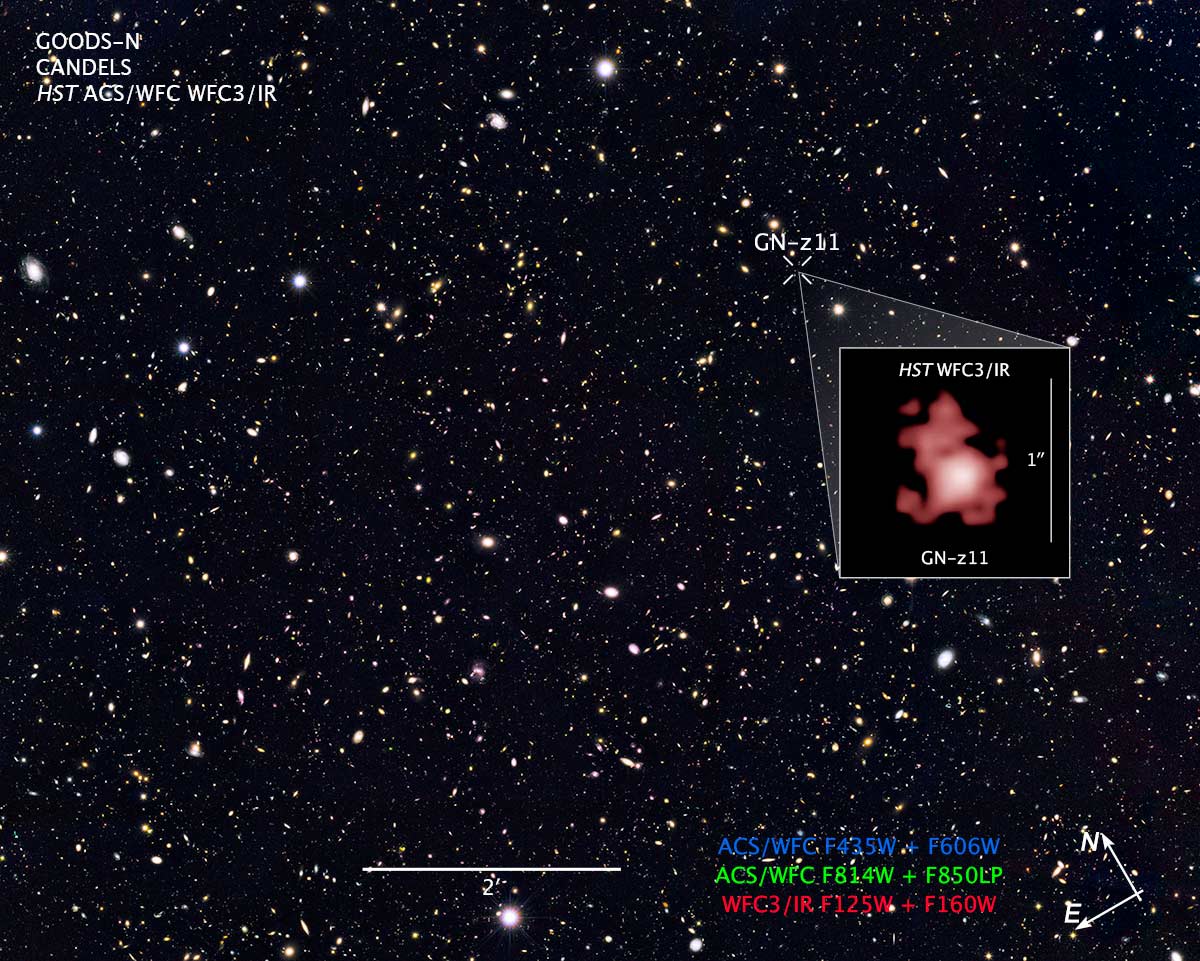 “Our spectroscopic observations reveal the galaxy to be even farther away than we had originally thought, right at the distance limit of what Hubble can observe,” said Gabriel Brammer of STScI, second author of the study.

Before astronomers determined the distance for GN-z11, the most distant galaxy measured spectroscopically had a redshift of 8.68 (13.2 billion years in the past). Now, the team has confirmed GN-z11 to be at a redshift of 11.1, nearly 200 million years closer to the time of the big bang. “This is an extraordinary accomplishment for Hubble. It managed to beat all the previous distance records held for years by much larger ground-based telescopes,” said investigator Pieter van Dokkum of Yale University. “This new record will likely stand until the launch of the James Webb Space Telescope.” 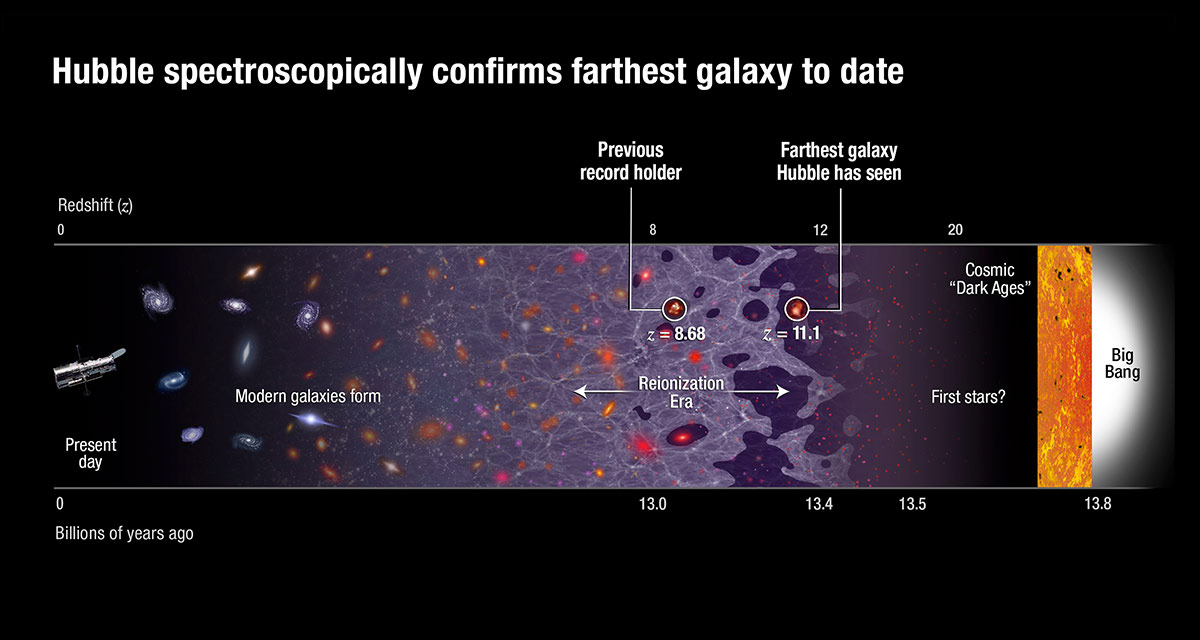 The combination of Hubble’s and Spitzer’s imaging reveals that GN-z11 is 25 times smaller than the Milky Way and has just one percent of our galaxy’s mass in stars. However, the newborn GN-z11 is growing fast, forming stars at a rate about 20 times greater than our galaxy does today. This makes such an extremely remote galaxy bright enough for astronomers to find and perform detailed observations with both Hubble and Spitzer.

The results reveal surprising new clues about the nature of the very early universe. “It’s amazing that a galaxy so massive existed only 200 million to 300 million years after the very first stars started to form. It takes really fast growth, producing stars at a huge rate, to have formed a galaxy that is a billion solar masses so soon,” explained investigator Garth Illingworth of the University of California, Santa Cruz. 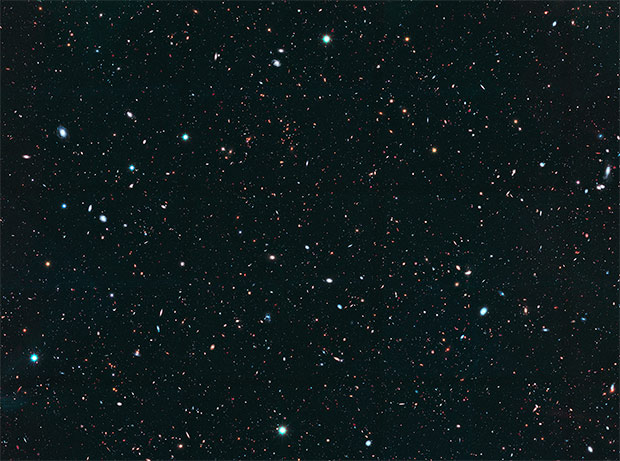 These findings provide a tantalizing preview of the observations that the James Webb Space Telescope will perform after it is launched into space in 2018. “Hubble and Spitzer are already reaching into Webb territory,” Oesch said. “This new discovery shows that the Webb telescope will surely find many such young galaxies reaching back to when the first galaxies were forming,” added Illingworth.

This discovery also has important consequences for NASA’s planned Wide-Field Infrared Survey Telescope (WFIRST), which will have the ability to find thousands of such bright, very distant galaxies.

The team’s findings will appear in the March 8, 2016, edition of The Astrophysical Journal.