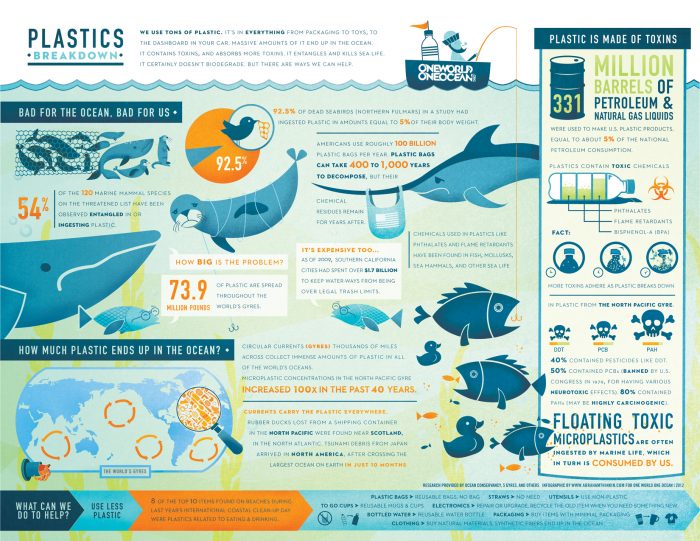 In 1950, plastic was a rarity. Today, plastic is everywhere – in our homes, cars, streets, landfills, and oceans. Scientists recently calculated how much plastic humans have produced since that year, and the conclusion is mind-boggling: 9 billion tons, or 8.3 billion metric tons. [1]

A study published July 19, 2017 in the journal Science Advances reveals that plastics production has risen at a compound annual growth rate of 8.4% in the last 67 years, more than 2.5 times the rise in the global gross domestic product.

A mere 2 million pounds of plastic was available in 1950, compared with more than 400 million tons in 2015. Shockingly, half of the world’s plastics were produced in the last 13 years.

And, the researchers estimated, the amount of plastic in use now is 30% of all plastics ever produced. [2]

As of 2015, about 7 billion tons of plastic waste had been disposed of as waste. Of that amount, just 9% of it gets recycled, 12% is incinerated, and 79% winds up in landfills, according to the report.

If humans don’t act quickly to reverse the upward trend, 13.2 billion tons (6.3 billion metric tons) will be disposed of in landfills by 2050, the researchers wrote. Right now, there is already countless plastic particles polluting the oceans. Something needs to be done.

Roland Geyer, an associate professor of industrial ecology at the University of California, Santa Barbara, and lead author of the new study, said:

“You could say, ‘What a phenomenal success story,’ but I do think it will come with some heavy environmental collateral damage.”

“Humankind is making an incredible amount of plastics, even more than we thought it would be, and it keeps increasing. And we’re not very good at dealing with the waste.” [1]

The same team of researchers worked on an earlier study which found in 2015 that between 5 million and 13 million metric tons of plastic work their way into the ocean each year. In this recent study, the researchers noted that plastics are found in every major ocean basin on the planet. [2]

“The growth of plastics production in the past 65 years has substantially outpaced any other manufactured material. The same properties that make plastics so versatile in innumerable applications — durability and resistance to degradation — make these materials difficult or impossible for nature to assimilate.

Thus, without a well-designed and tailor-made management strategy for end-of-life plastics, humans are conducting a singular uncontrolled experiment on a global scale, in which billions of metric tons of material will accumulate across all major terrestrial and aquatic ecosystems on the planet.”

According to Geyer, recycling alone doesn’t cut it. He and his colleagues recommend weighing the advantages and disadvantages of the different strategies for managing plastics. Reusing and recycling are 2 of those strategies, but they’ve done little to solve the problem.

Strategies like substituting other materials or using waste-to-energy or other technologies for converting the materials into other substances should be given greater consideration.