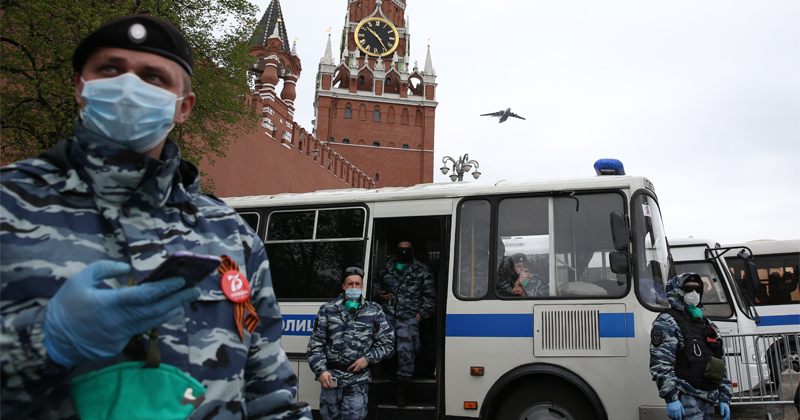 On April 16, one day before Vladimir Putin nixed a parade from a celebration marking the 75th anniversary of WWII (which was held on Saturday with a limited display), some 15,000 Russian cadets were rehearsing for their yet-to-be canceled demonstration in Red Square.

Nearly one month later, Russian website Proekt reported on Monday that at least 376 of the cadets contracted coronavirus. The report comes as Russia has the second-fastest rate of infections in the world after the US – with 11,000 new infections registered on Monday.

Via the Moscow Times:

The virus broke out among officers and cadets in at least five elite Russian military academies and one regiment — out of the more than 40 involved — following the parade rehearsals, Proekt cited participants and their relatives as saying.

“That YouTube video filmed by bus drivers was true, my son told me,” an unnamed mother of a naval infantry brigade soldier was quoted as saying, referring to unconfirmed footage of rehearsals outside Moscow which showed crowds of troops gathered in an apparent violation of social distancing guidelines.

The mother of a Defense Ministry Military University cadet said she believes that the officers played a bigger role in spreading Covid-19 than the rehearsals themselves. “Regular cadets have been [quarantined] since mid-March, but officers, cooks and teachers” could go in and out, she was quoted as saying.

Meanwhile, an order from Vladimir Putin barring soldiers from speaking with the media prevented Proekt from investigating further according to the publication.

According to the Times, Russia’s military promised to quarantine everyone who attended the April rehearsals following. As of Sunday, the military reported that 1,132 cadets and 1,723 troops have tested positive for the virus.

Russia commemorates the Soviet victory over the Nazis each year on May 9 with a massive military display that sees thousands of troops and tanks parade through Red Square and military jets fly in formation over the capital. Some 15,000 members of the military were expected to take part in this year’s parade on Red Square.

This year’s parade was meant to be a major showcase for Putin, with world leaders and veterans from all over Russia invited to watch and take part in events over four days. –Moscow Times

According to Putin, speaking from his residence outside Moscow on Monday: “We have a long and difficult process ahead of us with no room for mistakes.”