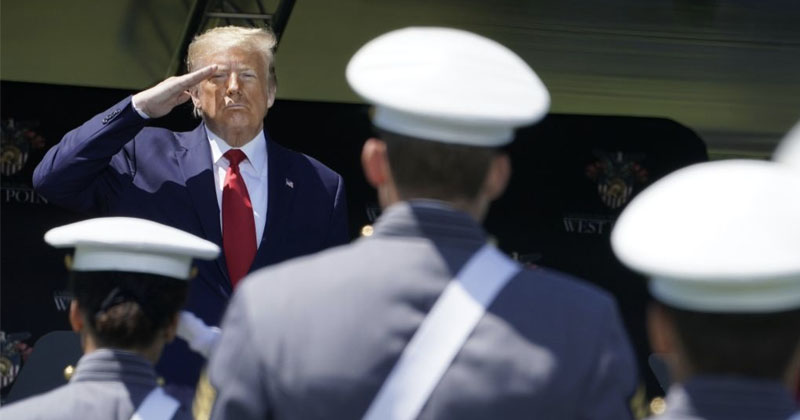 In a letter inscribed with 235 signatures, the military leadership admits that America is besieged by foreign and domestic enemies, and that Trump is the only “proven leader” able to confront them.

“The 2020 election affords the American people an urgently needed opportunity to affirm their devotion to the Constitution of the United States and to the American way of life. As senior leaders of America’s military, we took an oath to defend the United States from all enemies, foreign and domestic,” the letter states.

“At present, our country is now confronted with enemies here and abroad, as well as a once in a century pandemic. As retired military officers, we believe that Donald J. Trump has been tested as few other presidents have and is the proven leader to confront these dangers.”

“President Trump’s resolute stands have deterred our enemies from aggression against us and our allies. The proposed defense cuts by the Democrats will, in our professional judgment, create a potentially perilous situation for the United States during a time of great external and internal threats to our Nation.”

The letter goes on to assail the Obama/Biden administration for “undermining” America’s “military strength”, and warns that radical Democrat policies will hurt America’s national security.

“During the Obama/Biden administration, America’s armed forces were subjected to a series of ill-considered and debilitating budget cuts. The Democrats have once again pledged to cut defense spending, undermining our military strength,” the letter continues.

“The Democrats’ opposition to border security, their pledge to return to the disastrous Iran nuclear deal, their antagonism towards the police and planned cuts to military spending will leave the United States more vulnerable to foreign enemies.”

The Atlantic hit piece accused Trump refusing to visit a WWI memorial in France because he thought the fallen soldiers were “losers” and “suckers”, a claim denied by over a dozen Trump administration officials who were present at the event.

Read the military’s endorsement letter below:

During the 9-4-20 press conference Donald Trump doubled down on the Atlantic hoax article that he called soldiers suckers and losers.