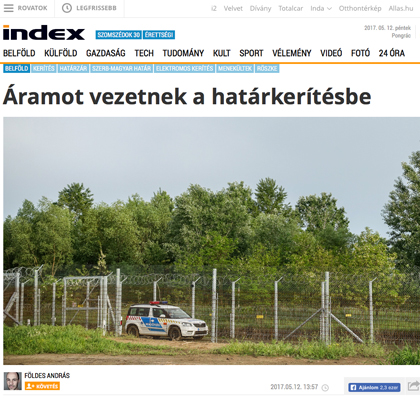 Hungary, which has resisted EU demands to take in more migrants, has reportedly electrified its double-sided fence on the Hungarian-Serbian border, according to local media.

Hungarian media was tipped off when border officials installed new electrocution warning signs in Arabic, Hungarian and Serbian on the fence.

“It may not be a full fence shield, but there are fixed wires running parallel to the ground,” reported journalist András Földes. “The 12 wires mounted on insulated points are visible on both fences of the double fence, with insulated portions on the inside of the fences since it’s assumed they [the migrants] will only come from the outside if they come in.”

“…We also learned that a worker was shaken at the time of the installation and that he was hospitalized,” he added.

The country is resisting the EU’s decision to distribute migrants – the majority of the military-age males – across member countries on a “mandatory quota basis,” which directly challenges Hungary’s national sovereignty and self-determination.

“Faced with massive arrivals in Italy and Greece, in September 2015 EU interior ministers decided to relocate 120,000 people to other member states – based on a mandatory quota system over a period of two years,” reported the EU Observer. “Reluctant states opposed to the idea of mandatory quotas – the Czech Republic, Hungary, Romania and Slovakia – were outvoted by the other member states in a qualified majority vote, which weighs up factors such as population size.”

“Hungary and Slovakia decided to challenge the decision in December 2015.”

The Prime Minister of Hungary, Viktor Orbán, even sealed off the country’s borders in 2015 during the apex of the migrant crisis.

A year later, 95% of the Hungarian public rejected the EU mandatory migrant quota when the country held a referendum on immigration.

The victory allowed Orbán to continue crafting border security measures, including the electrified fence on the Hungarian-Serbian border.