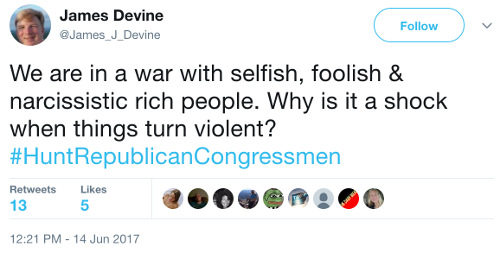 A New Jersey Democrat operative is calling for the murder of conservatives and “rich people” by using the hashtags #HuntRepublicans and #HuntRepublicanCongressmen on social media.

In the hours following Wednesday’s shooting of GOP lawmakers and staff in Virginia, James Devine, a Democrat consultant, began urging his followers to commence hunting Republicans, tweeting, “We are in a war with selfish, foolish & narcissistic rich people. Why is it a shock when things turn violent? #HuntRepublicanCongressmen”

Devine added on Facebook that he has “little sympathy” for Rep. Steve Scalise (R-LA) who is still fighting for his life after being shot through his internal organs.

“I have little sympathy for the Republican Congressman who got shot today because he viciously opposed President Obama’s effort to reduce gun violence and instead, he accepted more gun lobby money than all but 15 other members of the House of Representatives,” wrote Devine.

Devine would go on to retweet his original post, as well as others containing his self-styled hashtags, completing the doubling-down process by accusing Republican “snowflakes” of bringing violence upon themselves.

“I am sorry if my #HuntRepublicanCongressmen hashtag hurt the feelings of any GOP snowflakes but you have not engaged in civil discourse,” he wrote. 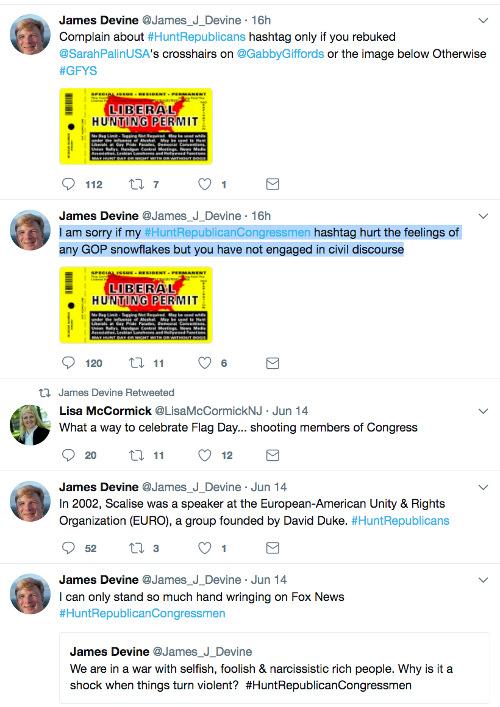 Devine’s most recent tweet echoes sentiments put forth by the New York Times, who attempted to place blame on Sarah Palin for Wednesday’s near-massacre by left-wing domestic terrorist, James Hodgkinson, by recycling a debunked conspiracy theory that was originally used to pin the 2011 shooting of then-Arizona Congresswoman Gabby Giffords and killing of bystanders by Jared Lee Loughner – a deranged leftist and abuser of hallucinogenic drugs – on Palin at the time.

“In 2011, when Jared Lee Loughner opened fire in a supermarket parking lot, grievously wounding Representative Gabby Giffords and killing six people, including a 9-year-old girl, the link to political incitement was clear,” wrote the Times. “Before the shooting, Sarah Palin’s political action committee circulated a map of targeted electoral districts that put Ms. Giffords and 19 other Democrats under stylized cross hairs.”

Devine was asked for comment on his outbursts by NJ101.5, and again, he doubled-down on his statements, displaying all the signs of a radicalized leftist with a toxic case of Trump Derangement Syndrome – while somehow claiming he is not advocating violence.

“It is insensitive and I don’t care,” he said. “You want me to be politically correct? I don’t have time for that anymore.”

Devine’s social media is filled with advertisements for his support of Bernie Sanders, as was shooter Hodgkinson’s, who worked on Sanders’ presidential campaign. 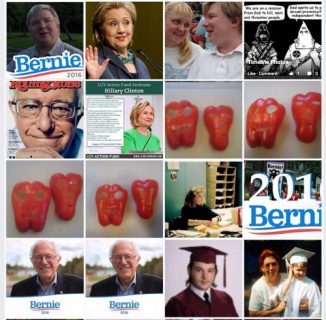 On his website, Devine claims to have been at the “center of political activity in New Jersey since 1980.”

“Over the past 35 years, Devine accumulated experience in every facet of politics (running campaigns for local school board, city council and mayor to state legislature, governor, congress and the presidency) and government (as a top level legislative staff member and manager of a federal agency with 1,150 employees under his command),” reads his bio. “Devine commanded more than one thousand federal employees operating throughout four New Jersey counties while he was employed as a manager with the U.S. Department of Commerce, from 1989 through 1990.”