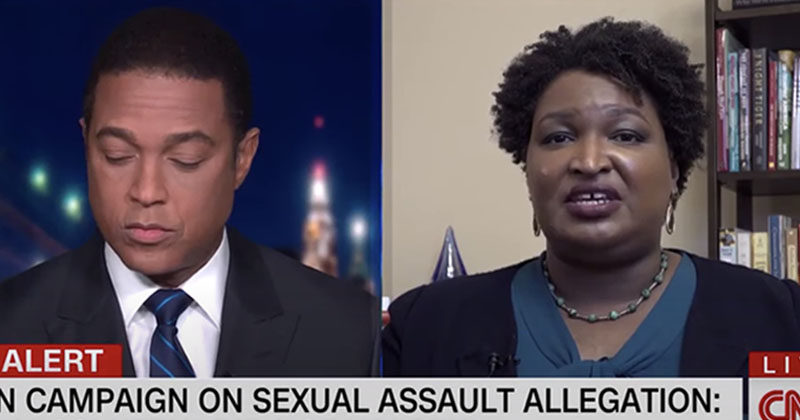 Failed Georgia gubernatorial candidate Stacey Abrams has rejected the Me Too movement’s “Believe All Women” philosophy in support of presumptive Democrat presidential nominee Joe Biden, asserting that his alleged sexual assault of former staffer Tara Reade “did not happen.”

“I believe that women deserve to be heard, and I believe that they need to be listened to,” Abrams told CNN’s Don Lemon on Tuesday. “But I also believe that those allegations have to be investigated by credible sources. The New York Times did a deep investigation. And they found that the accusation was not credible.”

Except, that is a lie — the NYT did not say Reade’s allegation was not credible.

CNN of all networks called out Abrams and Biden’s campaign for twisting The Times‘ report:

It’s also not accurate. Because The New York Times’ piece that Abrams referenced with Lemon on Tuesday night — and which the Biden campaign talking points lean heavily on — does not, in fact, find that Reade’s accusation is either “not credible” (Abrams’ words) or that “this incident did not happen” (Biden talking points).

And here’s what it concluded:

“No other allegation about sexual assault surfaced in the course of reporting, nor did any former Biden staff members corroborate any details of Ms. Reade’s allegation. The Times found no pattern of sexual misconduct by Mr. Biden.”

That is a far different conclusion than simply listening to Abrams or reading the Biden campaign talking points would lead you to believe. What the Times found was not that Reade’s allegations were false. They simply did not find any former Biden staffer who confirmed the report.

“I believe Joe Biden. I believe that he is a person who has demonstrated that his love of family, his love of our community, has been made perfectly clear through his work as a congressional leader and as an American leader,” Abrams continued.

The vice presidential hopeful added, “I think that he is telling the truth and that this did not happen.”

When asked by Lemon if she was applying a “different standard” to Biden than she did to Supreme Court Justice Brett Kavanaugh when he was accused of sexual assault by Christine Blasey-Ford in 2018, Abrams rejected the notion.

After the courageous and compelling testimony from Dr. Christine Blasey Ford yesterday, it is shameful that Kavanaugh's nomination is being rushed forward.

I believe women, and I believe survivors of violence always deserve to be supported and to have their voices heard. https://t.co/rtT1PQr4Zq

“Not at all. I believe then, and I believe now, that women deserve to be heard because too often they are not, and Tara Reade deserved to have her story listened to and investigated,” Abrams said.

Notably, an FBI investigation was launched against Kavanaugh, which turned up nothing. That’s because Blasey-Ford presented virtually no evidence or witnesses to corroborate her claim.

In contrast, Reade’s allegations are corroborated by several witnesses and pieces of evidence, including a 1993 clip from CNN’s Larry King Live where Reade’s mother called in to complain about her assault.