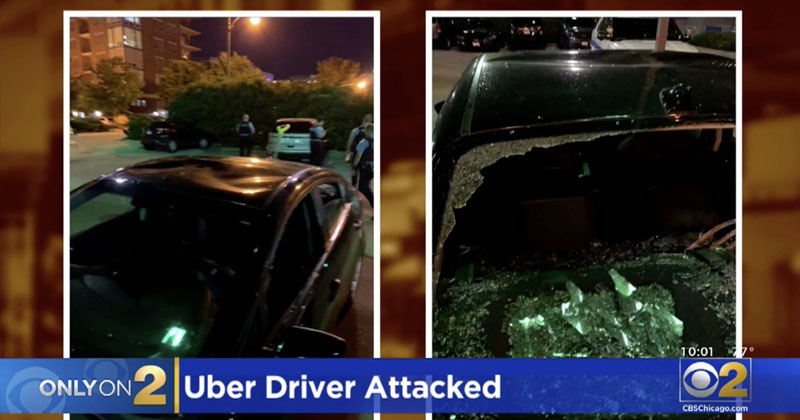 An Uber driver was left traumatized after a large mob of “teens” swarmed his vehicle and tried to violently break in to grab him and his passengers.

On July 4th, the Uber driver found himself downtown surrounded by hundreds of Black Lives Matter protesters being pushed back by nearby Chicago police, and tried to escape after the mob began attacking his car.

“I knew they were coming I said, ‘Oh f***, and so they came and jumped on the car and started dancing around on the hood,” he said.

But the BLM thugs bashed in all his windows, and even hurled a pitchfork into the back of his Kia which barely missed the passengers.

“And then they broke in the driver window, and that’s where I knew we were in big trouble, because they were trying to grab me, and I heard the back rear window shatter as well,” he said.

“Who knows what would have happened if they were able to pull us out of the vehicle? It seem like they wanted blood,” he continued. “It’s terrifying just to think that there’s just basically a school a piranhas just roaming the streets of Chicago, and we don’t know where they’re going to show up.”

The Uber driver added that it’s going to “take a while” for him to regain trust in Chicago’s leadership in light of the skyrocketing violence and mayhem plaguing the city.

“I’m just scared, and it’s going to take a while to regain the trust of the city, I guess,” he said.

The driver added that was not injured, but he said his car had more than $8,000 in damage.

The local news was careful to brand the violent BLM attackers as “wiley teenagers”, but as was widely reported, thousands of BLM supporters were marching and disrupting traffic downtown during the July 4th weekend.

Lori Lightfoot is rapidly losing control of the political machine in Chicago as people realize how incredibly incompetent and corrupt she is.