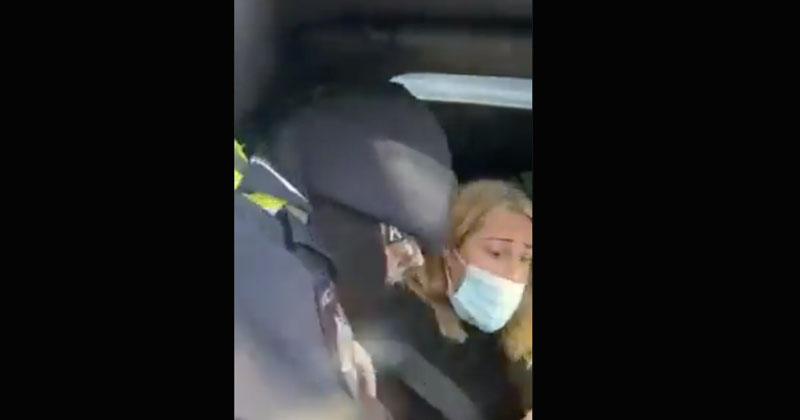 A confrontation over a windscreen-mounted mobile phone saw a Victoria woman violently pulled from her vehicle by armed police, who allegedly wrestled her to the ground. The dramatic arrest was captured by the phone’s camera.

Natalie Bonett, 29, began filming her ordeal shortly after engaging in an argument with police who stopped her at a checkpoint in Wallan, north of Melbourne, where a strict stage-four quarantine is in place.

An officer had told her that it was illegal to have a mobile phone mounted on a windscreen and that the device was obstructing her view. A brief and tense argument ensued as the officer demanded that Bonett step out of the car, and she refused. “I don’t feel safe, you’re armed,” the woman said after the law enforcer called for backup.

The video then shows the officer lean over to the woman in an effort to drag her out of the vehicle. “Get off me!” she screams repeatedly, as a person in the passenger seat tries to pull her back in.

Meanwhile, in Melbourne…
Pregnant mum arrested in front of her children & all her devices/computers seized because of a Facebook post about a proposed lockdown protest..
pic.twitter.com/CuFyQzwxHp

Bonett herself described the arrest as harrowing. She claimed that four officers grabbed her by the legs and finally removed her from the vehicle. “While trying to cuff me they had their knees in my back and [I] couldn’t breathe,” the woman told her Facebook audience.

“I am shaking and my blood is boiling,” she wrote, promising to release a further video “when my head is in the right headspace.”

For some reason, the footage has been scrubbed from her Facebook page, but was widely shared elsewhere on social media.

Victoria Police have been prompt to give their take on the video. Bonett had refused to remove the phone from the windscreen and would not provide her name and address, which is punishable under road safety laws, the authorities insisted.

Bonett was later released and “is expected to be charged on summons with driving with obscured vision, fail to produce license, fail to state her name and address, resist arrest, assault police and offensive language,” the statement revealed. It did not say anything about the officers’ conduct, however.

Local police have already taken heat online for heavy-handed tactics used to enforce the lockdown rules. Weeks ago, officers arrested a pregnant mother for alleged “incitement” of an anti-lockdown event, despite her pleas to let her undergo a scheduled ultrasound scan. Footage of her being handcuffed sparked outcry on social media.

On a separate occasion, officers used brute force to serve an arrest warrant on a Melbourne-based leader of the anti-lockdown protest, hammering on his door and putting him in handcuffs.

Police chiefs have repeatedly warned that they will be out in full force to enforce the quarantine in Melbourne and Victoria state, the two coronavirus hotspots in Australia. The region recently extended the lockdown until late September, just as the country reported more than 26,600 Covid-19 cases and over 800 deaths.

Syrian Girl joins The Alex Jones Show from Australia to break down the growing police state the world over.