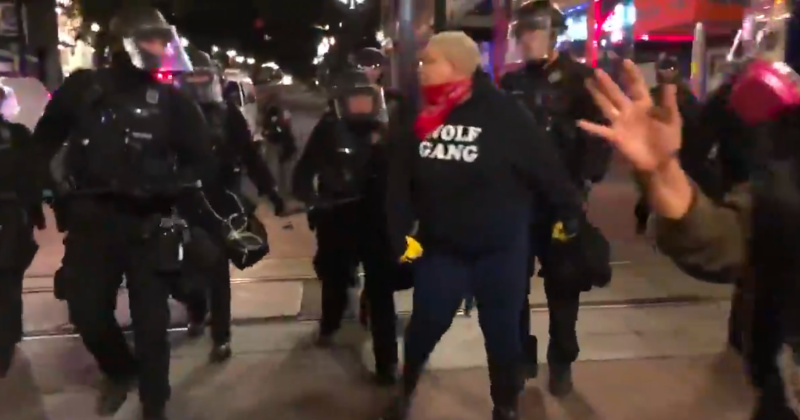 Shocking eyewitness footage captured during this past weekend’s unrest in Portland shows a Black Lives Matter protester, who claimed to be disabled, wishing death on police officers and their families.

As police were clearing the streets of Portland amid ongoing Black Lives Matter protests Saturday, one man was hospitalized with a fractured skull, caused by non-lethal munitions fired to disperse crowds on the 45th consecutive day of protests.

Elsewhere in the city, another protester claimed she was disabled and therefore unable to comply with police orders to walk faster.

In shocking eyewitness footage from the incident, after being pushed by one officer, the woman can be heard saying, “I hope someone kills your whole f***ing family!” and “I hope they kill you too.”

“I hope someone burns down your whole precinct with all y’all inside… can’t wait to see it,” she adds, concluding the brutal tirade of curses.

However, many commenters online were unsympathetic to the woman’s pleas, remarking that she clearly wasn’t too disabled to participate in a riot.

Obese woman says she is disabled as a reason for not following police orders at the Portland BLM/antifa riot. https://t.co/ZZOxFf4Snj


But we live under oppression ? You can spit and curse at the “man” and nothing happens to you ? Talk about a delusional reality


“What she said about hoping the officers family dies should be a hate crime!” wrote one flabbergasted tweeter.

The unrest continued throughout the weekend and into the early hours of Monday morning as protests in the wake of George Floyd’s death show no signs of letting up.

Some demonstrators even lit a fire at the base of the former site of the city’s elk statue, which had been unceremoniously torn down, as protesters vented their anger and frustration at the authorities.