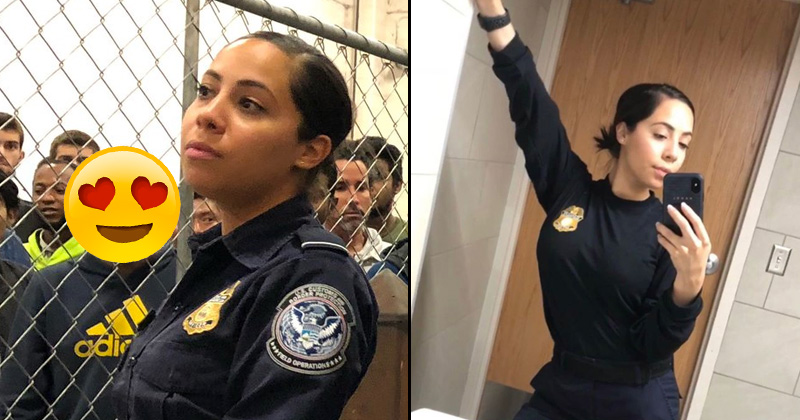 A female detention guard at a Texas ICE facility has become a viral sensation after she was pictured policing illegal immigrant inmates during a vice presidential tour.

Rio Grande Valley resident Kiara Cervante wasn’t the subject of the photo, but merely standing guard doing her job at a Customs and Border Protection detention center in McAllen, Texas, as Vice President Mike Pence and other Republican politicians toured several facilities over the weekend. 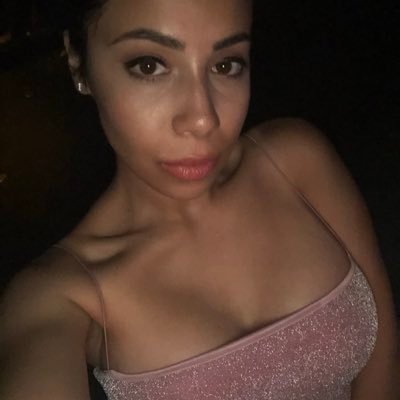 But the Internet took immediate notice of her — a powerful uniformed Hispanic woman standing tall and serving her country in the face of the horrific overcrowding nightmare manifest from a broken immigration system.

Dubbed #ICEBae, Cervante launched a Twitter account (@kiarace24) and has amassed close to 40 thousand followers in just under two days.

“Soooo it’s crazy…. but here I am. I’m hearing something about a viral picture,” Cervante noted in her first tweet. “I would like to say i was just doing my job.. providing security for the visit of @VP. It was an honor and I take a lot of pride in my job!”

Soooo it’s crazy…. but here I am. I’m hearing something about a viral picture. I would like to say i was just doing my job.. providing security for the visit of @VP
. It was an honor and I take a lot of pride in my job!

After some began doubting her authenticity, she uploaded an 18-second video wearing what the DailyMail.com described as “a low-cut grey T-shirt and a high ponytail” as further evidence that she was real.

Many on social media were so distracted by Cervante, they dropped their pretentious virtue signaling to comment on how they wouldn’t mind being incarcerated by her.

Hell yeah, I’d love to get “detained” by that one!

I'm not illegal, but I can be if it means I can smell her through that chain link fence. pic.twitter.com/96zQ2RkzCF

Tell AOC we breaking up and tell ICE to come get me! 😂 pic.twitter.com/YO5IZqnBvl

How do I sneak into America from New Jersey?

She also sprang a series of memes:

All of these idiotic conservatives flipping out about AOC just raised her status. #IceBae comes along and destroys her without effort. photo by @PuddHoney pic.twitter.com/8VsiK0cZQg

me waking up in concentration camp knowing #icebae gon bring me bread and water pic.twitter.com/3YUAg16YXm

Fine ICE Agent : "are you documented sir"
(after ripping up my birth certificate)
Me: "me no speaka english"
😆😆😆 pic.twitter.com/cz8JileiY3

So that’s why she meant when she said detainees were thirsty?!

Sour leftists, meanwhile, threw shade at Cervante and her supporters:

This #IceBae thing proves a lot of black men really love gassing non-black women of color. Even if there’s a serious lack of human morality involved. Y’all are disgusting.

Y'all will hype up any & everything lightskinned 🤦🏾‍♀️. If she would lock up her own wtf you think she would do to y'all niggas? The trap house would be raided with with a quickness. #IceBae pic.twitter.com/MzH5SExZfD

this country is a mess, we are praising and trending #IceBae when she is literally a guard at a CONCENTRATION CAMP, guarding CHILDREN IN CAGES, RIPPING FAMILIES APART AT THE BORDER. you’re all sick, honestly.

Despite the throng of illegals standing fenced behind her, Cervante’s poise helped destroy the Democrat narrative that ICE detention facilities are “concentration camps” run by iron-fisted “Nazi” guards.

#IceBae is a latina hero that knows about the factual dangers of letting in illegals. Democrats hate seeing minorities that have escaped their ways of thinking.Thank You for your service @kiarace24👌🇺🇸 pic.twitter.com/Pi0tRE01XY

Cervante did not respond to Infowars’ request for comment as of writing.