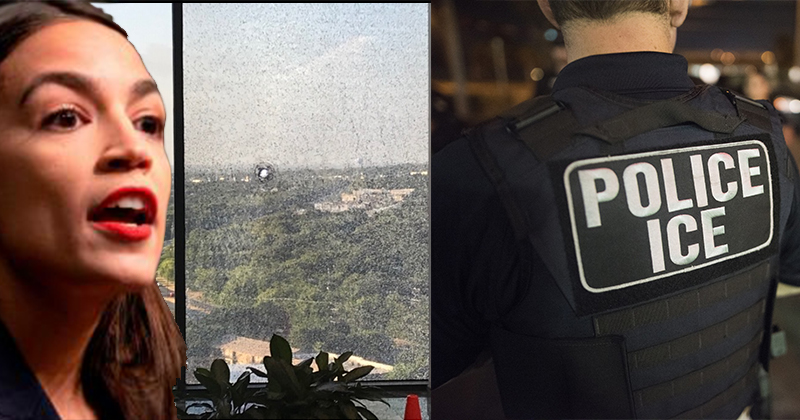 After an Immigrations and Customs Enforcement office was hit with gunfire in San Antonio, the Director of the office issued a statement blaming ‘various politicians, media outlets and activist groups’.

The windows of the ICE office near Loop 410 and Nacogdoches Road were shattered by shots police believe were fired from across the freeway before 3am on Tuesday.

#SanAntonio: Shots fired at ICE facility around 3 am this morning. Shots came from across the highway and hit the 14th floor. No one was injured and the suspect has been caught. The name of the suspect has not been released. pic.twitter.com/rHbTxQUVU5

Here's a photo of one of the bullet holes from this morning. @USCIS stands with @ICE as they work to enforce our laws and keep Americans safe! pic.twitter.com/AUvgpGJco6

“Police said they took a man into custody who was found along Village Drive, not far from where the shooting occurred,” the San Antonio Express-News reported. “No injuries were reported from the shooting.”

“It is unclear whether the ICE office was targeted or if it was a random attack.” the report notes.

“Had the bullets gone two inches in another direction, we could be here today talking about the murder of a federal official,” FBI special agent Christopher Combs said.

The Field Director at the office, Daniel Bible, seems more certain however, that the attack was deliberate, and he’s blaming leftist anti-ICE rhetoric.

Bible notes that ‘misinformation’ about ICE is being ‘recklessly disseminated’ by certain politicians and activists.

“ICE officers put their lives on the line each and every day to keep our communities safe,” the statement said. “This disturbing public discourse shrouds our critical law enforcement function and unnecessarily puts our officers’ safety at risk.”

Bible’s condemnation is clearly aimed at Rep. Alexandria Ocasio-Cortez (NY), who has declared that ICE facilities on the border are ‘concentration camps’.

The same rhetoric has been used by Antifa affiliated individuals, in particular the terrorist who attempted to kill ICE workers at a Tacoma, WA facility last month.

“We cannot allow political discourse to lead us to the point of violence, where federal employees, innocent people doing their jobs, are put in harm’s way,” added agent Combs.

AOC has yet to comment on the ICE shooting.

Instead, she’s tweeting about pockets and left handed day.

I’ve been watching this on loop 🥰 https://t.co/tQouO6UB4n