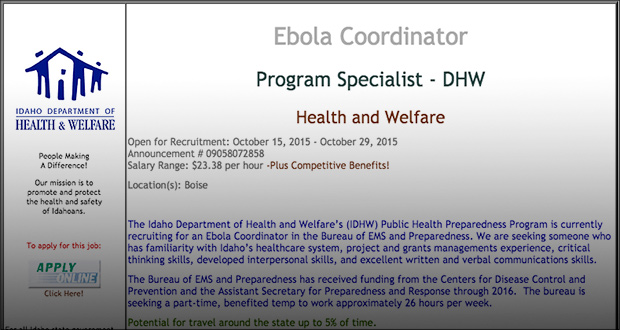 The State of Idaho is seeking a person with healthcare system experience to head up their Ebola division, following reports that a nurse suffered a relapse of the deadly virus in London.

A job post appearing on the state’s site 7 days ago, according to Google, details the “Ebola Coordinator” job opening, a position whose candidate would be responsible for organizing with federal authorities.

“The Idaho Department of Health and Welfare’s (IDHW) Public Health Preparedness Program is currently recruiting for an Ebola Coordinator in the Bureau of EMS and Preparedness,” the posting for the $23.38 per hour job states.

“We are seeking someone who has familiarity with Idaho’s healthcare system, project and grants managements experience, critical thinking skills, developed interpersonal skills, and excellent written and verbal communications skills.”

The posting explains the state has received federal funding from the Centers for Disease Control and Prevention and the Assistant Secretary for Preparedness and Response through 2016.

“The bureau is seeking a part-time, benefited temp to work approximately 26 hours per week,” the post says.

One of the “responsibilities” the candidate should be prepared for is assisting “in development of statewide transport and referral plans for an Idaho Ebola patient to be transported to the Region 10 treatment center.”

It’s curious exactly why the CDC has chosen Idaho for the position, especially since it is not one of the states that has experienced an outbreak, according to their own information.

On October 6, a Scottish nurse who had beaten Ebola was readmitted to a Glasgow hospital where doctors feared a relapse of the virus. Doctors are now claiming she was suffering from meningitis caused by the virus and not a recurrence of the actual virus.

Boise, Idaho is one of the 130 cities and towns where Syrian refugees have been resettled.