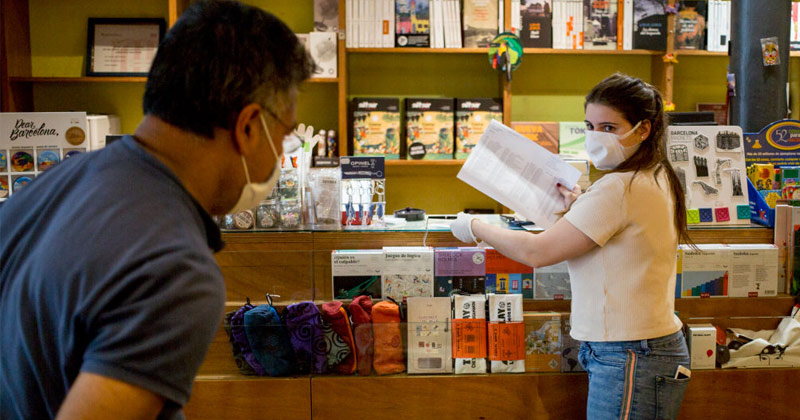 President Trump is convening with governors to reopen the economy, which will likely mean some sort of compulsory face mask order. Now is the time to seriously consider scrapping the patents on masks such as the N95.

Government at all levels has severely overreacted to the COVID-19 pandemic, but at long last there is political will to at least pretend as though there should be some return to normalcy. That, of course, doesn’t mean partisan politics is being set aside.

The governors of Connecticut, Delaware, New Jersey, New York, Pennsylvania, and Rhode Island, all Democrats, have announced that they are forming a “regional advisory council” to come up with a plan to reopen their economies. The same thing is being tried by West Coast Democratic governors in California, Oregon, and Washington.

However, the ultimate action taken will be a centralized one, Trump assures us, tweeting, “a decision…will be made shortly!”

The clampdown on economic and civil liberties will be restructured, almost certainly with more relief to the former than the latter. One likely compromise that any new national or regional policy will adopt is the condition that increased commerce requires mandatory mask wearing.

Such a policy across the nation would have to look more like how Los Angeles is doing it, sacrificing quality for quantity in masks. There, shoppers must don face coverings in order to enter stores, but pulling a shirt up over the mouth and nose suffices.

If masks are so important to public health, as some studies and Asian countries indicate, then the government ought to knock down every obstacle in the way of people buying and selling the best masks possible.

Patent law would be a good place to start.

Deterring innovation, it puts manufacturers at risk of litigation if they produce face masks that infringe on one of more than one thousand US patents that cover the N95, 3M’s medical mask and the most prized respirator on the market, IndustryWeek reported.

“I don’t want to be the jerk saying people shouldn’t do things to save people’s lives,” but potential contractors “should have eyes wide open,” Washington lawyer Ranga Sudarshan of Covington & Burling, who argues intellectual property cases in the US Court of Federal Claims, told IndustryWeek.

Even as 3M admits that it can’t supply enough N95 masks at the current demand, the company has yet to release its patents royalty-free, even temporarily, to other market producers. Effectively, the multinational conglomerate stands behind the force of government to protect its monopoly.

As Rothbard wrote in Man, Economy, and State, “Patents prevent a man from using his invention even though all the property is his and he has not stolen the invention, either explicitly or implicitly, from the first inventor. Patents, therefore, are grants of exclusive monopoly privilege by the State and are invasive of property rights on the market.”

Federal law may ostensibly protect against patent “hoarding” when it’s the government demanding that a protected item be produced for its purposes, but patent owners still can reap royalty payments from the contractors, according to IndustryWeek.

Now, removing the patent or its protections, just for a time, may not even be considered by those who put politics first.

It’s one thing when the TSA rolls back its ban on large bottles of hand sanitizer, or when governors relax border restrictions on nursing licenses. Such welcome changes offer unaccountable bureaucracies to save face.

Undoing patents is far too costly to those benefiting from monopolistic control on the market.

Consumers might begin to wonder, as did the late legal theorist Butler Shaffer, “Were Leonardo’s or Gutenberg’s inventions, or the Egyptian pyramids, or the Roman aqueducts, rewarded by state-issued patents?”

Are patents as we know them, government issued, necessary at all?

Shaffer noted, “Patents and copyrights inhibit the creative process by discouraging the exchange of information,” adding that the patenting process is so prohibitively costly that it leaves the little inventor at the mercy of the big corporation, which will keep the patent power in exchange for the invention.

It is unknowable how much further 3M or another innovator may have taken the N95 idea were it not for the patent monopoly.

As intellectual property expert Stephan Kinsella puts it, “It is possible that companies would have an even greater incentive to innovate if they could not rely on a near twenty-year monopoly.”

In the meantime, seamsters are turning to GoFundMe to support their homemade mask donations, such as these or these. Crafty hobby sites such as SewCanShe.com and FaveCrafts.com are providing free DIY guidelines that will come in handy for those unable to find good masks in stores.

Entrepreneurship remains alive and well in America, but as demand grows or government mandates expand, the patent monopoly will inhibit what public policy ostensibly seeks: a healthy people and a healthy economy.

Share this special report on the Microsoft world patent number 060606 and the plan for global enslavement.