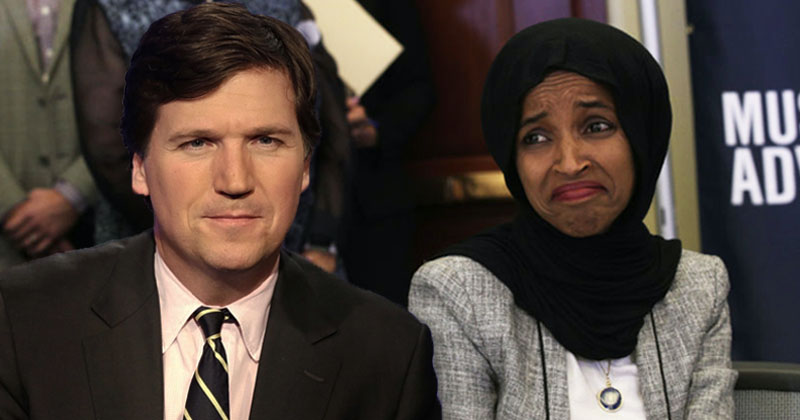 Radical Democrat Rep. Ilhan Omar (Minn.) called for an ad boycott against Fox News host Tucker Carlson after he called out her anti-American attitude on his show.

Advertisers should not be underwriting hate speech. https://t.co/iQdMJ0heXR

Shortly after Tucker’s Tuesday segment, Omar gloated that “racist fool” Carlson was “weeping” over the fact she’s a member of Congress.

Not gonna lie, it’s kinda fun watching a racist fool like this weeping about my presence in Congress 🤣🤣

No lies will stamp out my love for this country or my resolve to make our union more perfect.

They will just have to get used to calling me Congresswoman! https://t.co/nRS13yWivK

In the segment, Carlson criticized Omar not because of her race, but over her frequent divisive and anti-American remarks, including how she said the country was “founded on genocide,” and her downplaying the 9/11 attacks as “some people did something.”

"[@IlhanMN] became a member of Congress, elected by voters who were proud to see an immigrant succeed.

After everything America has done for Omar and for her family, she hates this country more than ever." – @TuckerCarlson pic.twitter.com/6jrvl4lAxA

“Omar isn’t ‘disappointed’ in America. She’s enraged by it. Virtually every public statement she makes accuses America of bigotry and racism. This is an immoral country, she says. She has undisguised contempt for the United States and for its people. That should worry you, and not just because Omar is now a sitting member of Congress. Omar is living proof that that the way we practice immigration has become dangerous to this country,” Carlson said.

The left has frequently targeted Fox News with ad boycotts, going after both Tucker Carlson for his views on illegal immigration and Laura Ingraham for mocking gun control advocate David Hogg.

Clearly, the boycotts haven’t succeeded, as Tucker Carlson Tonight and the Ingraham Angle are among the top-rated news shows on cable.

Alex Jones exposes the fraud Ilhan Omar for the authoritarian liar she really is.