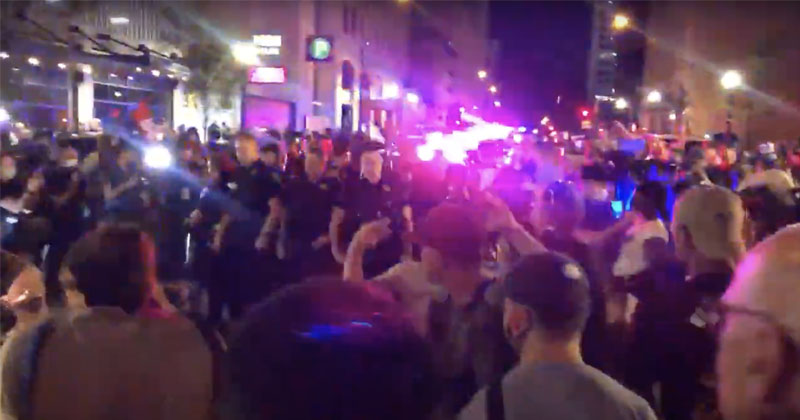 Protesters gathered downtown during and after Trump’s speech. Though the demonstrations were largely peaceful, police occasionally fired pepper balls to control the crowd.

Loud arguments broke out between Black Lives Matter activists and Trump supporters. Some protesters threatened to “beat up” their opponents, and told them to “go away.”

There were no major scuffles, however, and police said these encounters were “overwhelmingly” peaceful.

One woman was arrested on live TV for trying to “trespass” in the arena where the Trump rally was being held. She was wearing a T-shirt with the words ‘I Can’t Breathe’, and claimed to have a ticket for the event.

Longer video here: she tells the cop she has a ticket. He does not dispute that or ask to see it. pic.twitter.com/fHu6VgIeMR

The event was Trump’s first campaign rally since March. He talked about the need to restore law and order after the rioting and looting during protests against police brutality and racism sparked by the deaths of black men George Floyd and Rayshard Brooks, during separate botched arrest attempts by white police officers.

The president initially planned to hold a rally on Friday, but moved it to Saturday after receiving criticism that the event coincided with Juneteenth, a holiday celebrating the end of slavery in the US.

Owen Shroyer went to Tulsa to cover President Trump’s rally and debate with protesters, who predictably descended into violence.