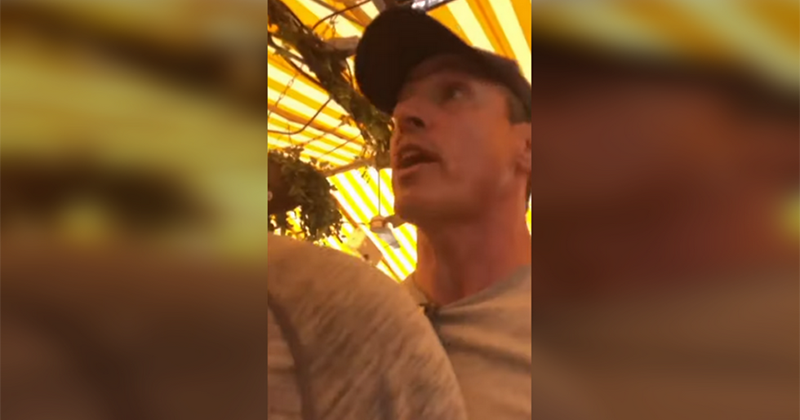 CNN host Chris Cuomo went ballistic over a man calling him ‘Fredo’, the name of the ‘weak’ middle brother in ‘The Godfather’. Cuomo threatened to throw the man down the stairs, arguing it was akin to using the n-word.

A video has surfaced online showing a man who appears to be CNN prime time host Chris Cuomo in a bitter argument with a bespectacled man who apparently had just called him “Fredo.”

The footage starts with an agitated Cuomo erupting into an expletive-ridden rant while accusing the man of hurling an ethnic slur at him.

Wrong @ChrisCuomo, “Fredo” simply means that you’re the dumb one.
Change our minds.https://t.co/SVkckMUt5e

The other man goes on the defensive, telling Cuomo that he “seems to be a much more reasonable guy in person” than on television. However, that innocuous piece of flattery does little to placate the anchor, who says: “If you want to play, we’ll f***ing play” and goes on with his rant peppered with profanities.

“Don’t f***ing insult me like that. You called me Fredo, like I call you ‘punk b***h,” Cuomo says, insisting that the man deliberately insulted him, despite his protests that he genuinely believed Cuomo’s name was ‘Fredo’.

That argument only seems to add fuel to the fire, as Cuomo switches to physical threats.

The footage, which is said to have been taken at an event in New York on Sunday, has been making the rounds on social media, sparking a Twitter moment of its own. Conservatives, including US President Donald Trump’s son Donald Trump Jr., derided Cuomo’s reaction to being called ‘Fredo’, while dismissing the alleged racial connotations of the word.

Hey @ChrisCuomo, take it from me, “Fredo” isn’t the N word for Italians, it just means you’re the dumb brother. 😉 https://t.co/sgg6yF7UDO

"Fredo" is not an "ethnic slur" against Italians.

But if you were to call me something like "Cuomo" — well, then we'd have a problem…

CNN stood by their host, with spokesperson Matt Dornic confirming that it was Cuomo in the viral video, while saying that he “defended himself when he was verbally attacked with the use of an ethnic slur in an orchestrated setup.”

The original video was published by the YouTube channel ‘THAT’S THE POINT with Brandon’, which said that it had been sent in by a fan. Unlikely though it may sound, TTP says the man featured in the video did not know Cuomo’s real name, as he had only heard of him through conservative talk radio host Rush Limbaugh, who often refers to Cuomo as ‘Fredo’. The channel reported that the man was a “news fan” and simply wanted to take a photo with the prominent TV personality when Cuomo burst into his tirade.

As the Cuomo video gained traction online, another one resurfaced, showing a CNN analyst using the exact same insult against Donald Trump Jr. The video is part of a CNN debate moderated by Chris Cuomo himself. CNN analyst Ana Navarro-Cárdenas calls Trump Jr. a ‘Fredo’ who his “daddy kept back home” as he “did not make the cut” for the White House, unlike his sister Ivanka and brother-in-law Jared Kushner. Cuomo seems to be completely OK with the reference, not making any attempt to interrupt the spirited tirade.

.@ananavarro slams Don Jr. for likening border wall to zoo fence: He's an "entitled, rich, spoiled little brat whose only call to fame is being his daddy's son."
"[D]addy kept Fredo back home…Who cares what [he] says. I don't want to talk about that entitled little brat." pic.twitter.com/zpTtp8ZfAd

‘Fredo’, or Frederico Corleone, is a fictional character in ‘The Godfather’, who is portrayed as the weakest of three brothers of the criminal clan. Cuomo has Italian heritage, both his mother and father being of Italian origin.