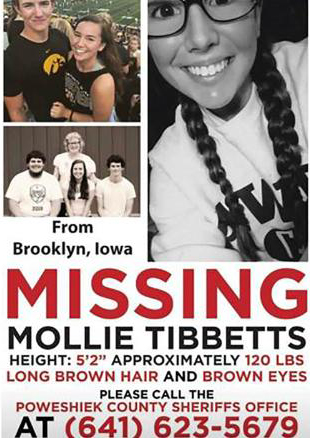 A man in the US illegally is being held on a murder charge after police located the body of missing Iowa woman Mollie Tibbetts. 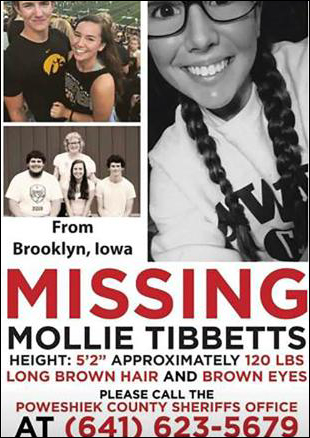 In a harrowing end to the weeks-long search of the 20-year-old college student, police found Tibbetts’ body in a field Tuesday obscured by corn stalks after she was last known to have gone out for a jog on July 18.

Police were able to pinpoint the University of Iowa student’s whereabouts by scouring through footage from around town and compiling data from her cellphone, social media and Fitbit exercise device.

After admitting to investigators on Monday he’d made contact with “a female running in Brooklyn,” Mexican national Christhian Bahena-Rivera, 24, escorted police to Tibbetts’ body.

According to a criminal complaint obtained by The Des Moines Register, Rivera claimed he saw Tibbetts and began “running behind her and alongside her,” prompting her to grab her phone and threaten to call police.

Responding to Tibbetts’ threat, Rivera “got mad,” at which point his memory blanked out, something that happens when “he gets very upset,” The Register reported citing the complaint.

When Rivera came to, he was at an intersection and only recalled he had Tibbetts’ body in the trunk of his car when he looked down and saw her earpieces in his lap.

Our thoughts continue to be with Mollie Tibbetts’ family and friends. Mollie went missing from her hometown of Brooklyn, Iowa last week. Please contact authorities if you have any information: https://t.co/TZWzvXYA2l pic.twitter.com/L4Fm5QQbAg

Rivera also told investigators how he pulled Tibbetts’ body out of the trunk, noticed she was bleeding from her head, and proceeded to drag her into the cornfield, leaving her body facing upward covered in corn stalks.

The clothing on the deceased body matched what Tibbetts was wearing prior to her disappearance, the complaint alleges.

The Register reports Rivera has been living in the US illegally for four to six years.

Commenting on the news, Vice President Mike Pence said he was terribly saddened by the situation.

Heartbroken by the news about Mollie Tibbetts. Mollie was an amazing young woman and we are praying for her parents, brothers & friends in this time of unimaginable grief…. https://t.co/JesB2VXjnN