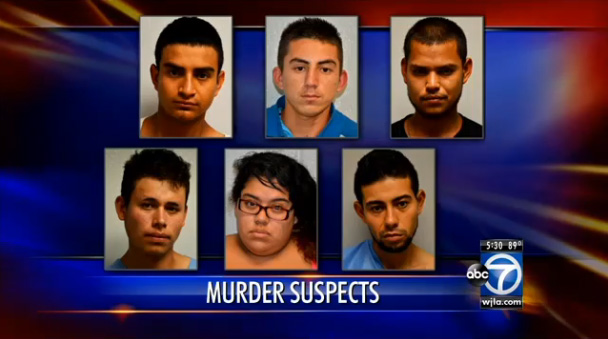 Police in Maryland have arrested six illegal immigrants, several of which are admitted MS-13 gang members, in connection with the death of a homeless man killed outside of a liquor store earlier this week.

Amos Milburn Jones, a 56-year-old homeless man, was beaten and stabbed to death outside of a shopping strip in Suitland, Md., early Tuesday morning, after witnesses say they saw him arguing with a girl.

From the Hyattsville Patch:

…Amos was hanging out with friends near a liquor store when he confronted a girl. An argument reportedly began, the young woman became angry and left. But, she allegedly returned with a group of men who beat Jones and then stabbed him multiple times in the chest and neck.

Yesterday, Suitland police revealed the 17-year-old female and several of the other suspects were members of the notoriously hyper-violent, multi-national gang known as Mara Salvatrucha, or MS-13, and that all six suspects would be charged with first degree murder.

Buried in a video report by ABC affiliate WJLA is a quick mention that all six arrested were illegal immigrants.

Though it is not yet clear whether the illegals came in with the recent surge, the brutal homicide will no doubt stoke concerns that a portion of the immigrants crossing into the country illegally are indeed gang members seeking new recruits, or simply wanting to cause trouble.

National Border Patrol Council Local chapter 3307 Vice President Chris Cabrera revealed last month that agents in South Texas are under orders to release detained illegal immigrant minors, regardless of whether they’re inked with gang tattoos, or openly admit to being gang members, so long as they have no U.S. criminal record. The sordid practice has reportedly led several federal agents to seek new employment.

Recently, a border agent, speaking to Infowars on the condition of anonymity, revealed that Rio Grande Valley sector agents had also received orders to release pregnant females “in any stage of pregnancy,” and women who merely claim to be bearing child. Undoubtedly, this applies to female gang members as well.

Of course, only a small minority of immigrants are readily surrendering to agents.

The aforementioned anonymous agent had previously issued a plea for help through Infowars, declaring, “As a Border Patrol Agent, I can tell you as an eye witness that we are currently losing more than we are catching.”

In the RGV [Rio Grande Valley], we have been averaging around 10,000 apprehensions per week. That means we are losing well over 10,000 aliens per week. And the aliens that are getting away are not the juveniles or the family units because they are turning themselves in at the first sight of agents. The ones we are losing are convicted felons, aliens from special interest countries, and other high risk individuals. We are so overwhelmed and preoccupied by the flood of juveniles and family units that we cannot use our resources to catch the more serious aliens.

Jones’ death will also further bring into question the federal government’s practice of transporting illegal immigrants from overloaded detention facilities in South Texas to various other parts of the country, including Maryland.

So far two facilities in Maryland, in and near Baltimore, have been approved to house illegal immigrants still waiting to be processed, according to an interactive map provided by NumbersUSA.com. However, the facility closest to where the homicide occurred is about 30 minutes away in Alexandria, Va.

A University of Maryland report on gangs says MS-13 is “..known to heavily recruit school aged members between 10 years of age and up. Gang members are known to hang around middle and high schools recruiting members as young as ten-years-old in and around schools…”

“MS-13 members have access to sophisticated weapons, thus making firearms trafficking one of their many criminal enterprises,” the report states. “Despite their access to weaponry, there have been many high-profile murders and assaults in which MS-13 have used machetes to attack their victims.

“What the people don’t realize,” former Border Patrol agent Zach Taylor warns, “is that it is putting their own children at risk, because these children are going to be put in schools with their children.” Taylor, a 26-year Border Patrol veteran, recently characterized the immigrant influx as “asymmetrical warfare” designed to systematically bring the country to its knees from within.