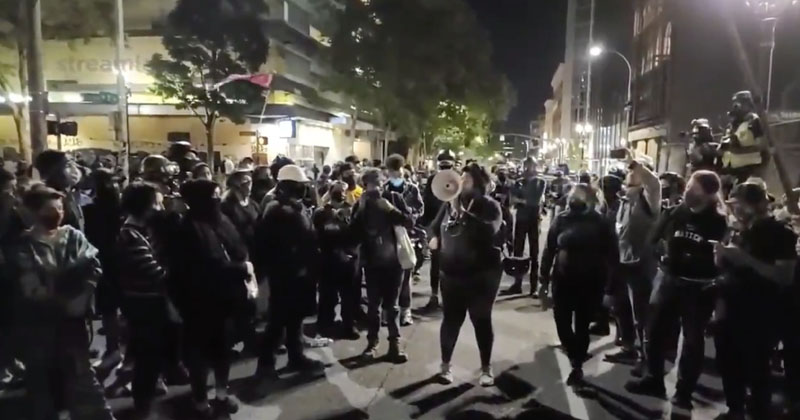 An alleged Trump supporter was shot dead in Portland late on Saturday as protesters from rival groups clashed in the northwest U.S. city, which has seen frequent demonstrations for months that have at times turned violent. Sounds of gunfire were heard in the area of Southeast 3rd Avenue and Southwest Alder Street, according to the spokesman’s statement.

Police said in statements that both the death and protest violence occurred in downtown Portland. However, they did not immediately link the shooting death to the protests.

“(Police) responded and located a victim with a gunshot wound to the chest. Medical responded and determined that the victim was deceased,” a Portland police spokesman said in an emailed statement. A Homicide Investigation is underway.”

The police said they were not currently releasing suspect information.

The New York Times and the Oregonian newspapers reported that a large group of supporters of President Donald Trump had traveled in a caravan through downtown Portland, with a pro-Trump gathering drawing hundreds of trucks full of supporters into the city. The Times cited two unidentified witnesses as saying a small group of people got into an argument with other people in a vehicle and someone opened fire.

The man who was shot and killed was wearing a hat with the insignia of Patriot Prayer, a far-right group based in Portland that has clashed with protesters in the past, according to the New York Times. Reuters could not independently verify this.

When asked by Reuters if the shooting was related to clashes between rival protesters in the same area, the spokesman said “it is too early in the investigation to draw those kinds of conclusions”.

“I am not sad that a f**king fascist died tonight,” yells a female Antifa militant at a gathering in downtown Portland. The crowd laughs and cheers. The victim was a Trump supporter. pic.twitter.com/XK4Czzseia

Black Lives Matter protesters and Antifa are cheering on the murder of a Trump supporter tonight in Portland.

“Our community held its own and took out the trash.” pic.twitter.com/9rJjBlwL1s

A large effort is underway to identify the shooter, which – if he’s the man in the below clip (unconfirmed), was misidentified as a black male earlier in the evening.

Portland shooter is 100% part of BLM/Antifa. He’s all over the video 7-8 mins earlier next to the bullhorn guy.

White kid in sandals talking to a girl in a striped dress.

He said to her “Hey, I hope I didn’t scare you earlier.” 3 mins before he shoots the Trump supporter. pic.twitter.com/tH4Lx0hfGi

Meanwhile, Twitter is full of hot takes and condolences:

I’m at a loss for words. Antifa killed my friend in Portland tonight. I’m heartbroken. Completely devastated. I have nothing left to say.

Will social media platforms ban all of BLM / Antifa from its platform now?

If the Proud Boys meet Facebook’s “dangerous individuals and organizations” policy, what about a movement that just openly incited murder?

A Trump supporter was murdered tonight in Portland. No one will riot in his name or donate millions to his family because he wasn’t shot by the police while resisting arrest.

Instead he is being smeared as a white supremacist, an extremist, and a terrorist, for being killed.

Meanwhile, “We burn them the fuck down”

A man was shot in the chest and killed in downtown Portland Saturday night as violence broke out across the city between a participants in a pro-Trump caravan and a protest organized by several opposing groups, including Antifa.

Police are investigating the incident which occurred at around 8:45 p.m. when officers responded to the sound of gunfire.

According to The Oregonian, police found “camouflage gear with infidel and thin blue line patches, which commonly indicate support for law enforcement, while the New York Times reports that he was “wearing a hat with the insignia of Patriot Prayer,” a right-wing group which has had frequent altercations with Antifa over the past several years.

(Real) Medics tried to save the shooting victim in downtown Portland. It is a white male contrary to what antifa journalists and accounts said about it being a black victim. pic.twitter.com/jzE2ffqN73

Patriot Prayer founder Joey Gibson showed up to the scene of the shooting, and was promptly chased down the street by orotesters. Gibson took refuge in a gas station.

Gibson has gone into a local gas station, protestors try to open the doors pic.twitter.com/Nb3d3iIsOA

Police move and move protestors away from the gas station pic.twitter.com/FJNnewoXcm

Earlier in the day, pro-Trump supporters and left-wing protesters squared off. At one point, a man reportedly filming the license plates of conservative attendees was beaten. As he falls, you can see his arms fly straight forward in the ‘fencing response,’ suggesting possible brain damage. He was later interviewed speaking coherently, however.

Patriot groups such as the Proud Boys and Troops for Trump came together to back law enforcement in front of the Portland Justice Center. ANTIFA and BLM groups were there to counter protest and the day got violent as fed up Americans pushed back against the domestic terrorist ANTIFA and BLM groups.