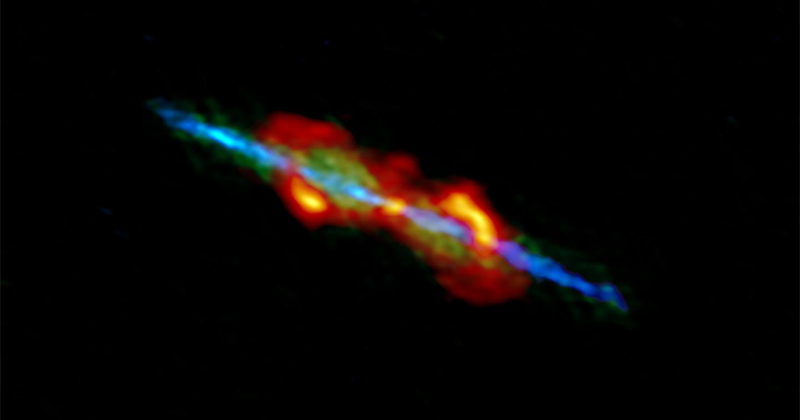 An international team of astronomers using the Atacama Large Millimeter/submillimeter Array (ALMA) has captured the very moment when an old star first starts to alter its environment.

The star has ejected high-speed bipolar gas jets which are now colliding with the surrounding material; the age of the observed jet is estimated to be less than 60 years. These features help scientists understand how the complex shapes of planetary nebulae are formed.

Sun-like stars evolve to puffed-up Red Giants in the final stage of their lives. Then, the star expels gas to form a remnant called a planetary nebula.

There is a wide variety in the shapes of planetary nebulae; some are spherical, but others are bipolar or show complicated structures. Astronomers are interested in the origins of this variety, but the thick dust and gas expelled by an old star obscure the system and make it difficult to investigate the inner-workings of the process.

To tackle this problem, a team of astronomers led by Daniel Tafoya at Chalmers University of Technology, Sweden, pointed ALMA at W43A, an old star system around 7000 light years from Earth in the constellation Aquila, the Eagle.

Thanks to ALMA’s high resolution, the team obtained a very detailed view of the space around W43A. “The most notable structures are its small bipolar jets,” says Tafoya, the lead author of the research paper published by the Astrophysical Journal Letters. The team found that the velocity of the jets is as high as 175 km per second, which is much higher than previous estimations. Based on this speed and the size of the jets, the team calculated the age of the jets to be less than a human life-span.

“Considering the youth of the jets compared to the overall lifetime of a star, it is safe to say we are witnessing the ‘exact moment’ that the jets have just started to push through the surrounding gas,” explains Tafoya. “The jets carve through the surrounding material in as little as 60 years. A person could watch their progress throughout their lifetime.”

In fact, the ALMA image clearly maps the distribution of dusty clouds entrained by the jets, which is telltale evidence that it is impacting on the surroundings.

The high velocity bipolar jets ejected from the central aged star are seen in blue, low velocity outflow is shown in green, and dusty clouds entrained by the jets are shown in orange.

The team suggests how this entrainment could be the key to formimg a bipolar-shaped planetary nebula. In their scenario, the aged star originally ejects gas spherically and the core of the star loses its envelope. If the star has a companion, gas from the companion pours onto the core of the dying star, and a portion of this new gas forms the jets. Therefore, whether or not the old star has a companion is an important factor to determine the structure of the resulting planetary nebula.

“W43A is one of the peculiar so called ‘water fountain’ objects,” says Hiroshi Imai at Kagoshima University, Japan, a member of the team. “These are old stars which show characteristic radio emission from water molecules. Our ALMA observations lead us to think that the water heated to generate the radio emission is located the interface region between the jets and the surrounding material. Perhaps all these ‘water fountain’ sources consist of a central binary system which has just launched a new, double jet, just like W43A.”

The team are already working on new ALMA observations of other, similar stars. They are hoping to gain new insight into how planetary nebulae form, and what lies in the future for stars like the Sun.

“There are only 15 ‘water fountain’ objects identified to date, despite the fact that more than 100 billion stars are included in our Milky Way Galaxy,” explains José Francisco Gómez at Instituto de Astrofísica de Andalucía, Spain. “This is probably because the lifetime of the jets is quite short, so we are very lucky to see such rare objects.”

Alex Jones shows Trump’s censored tweet of Bloomberg licking his fingers and probing communal food as the Democrat party collapses in on itself.