One could see this one coming from a mile away.

It was a week ago that we highlighted the latest implied IMF proposal on how to reduce income inequality, quietly highlighted in its paper titled “Fiscal Policy and Income Inequality“. The key fragment in the paper said the following:

Some taxes levied on wealth, especially on immovable property, are also an option for economies seeking more progressive taxation. Wealth taxes, of various kinds, target the same underlying base as capital income taxes, namely assets. They could thus be considered as a potential source of progressive taxation, especially where taxes on capital incomes (including on real estate) are low or largely evaded. There are different types of wealth taxes, such as recurrent taxes on property or net wealth, transaction taxes, and inheritance and gift taxes. Over the past decades, revenue from these taxes has not kept up with the surge in wealth as a share of GDP (see earlier section) and, as a result, the effective tax rate has dropped from an average of around 0.9 percent in 1970 to approximately 0.5 percent today. The prospect of raising additional revenue from the various types of wealth taxation was recently discussed in IMF (2013b) and their role in reducing inequality can be summarized as follows.

• Property taxes are equitable and efficient, but underutilized in many economies. The average yield of property taxes in 65 economies (for which data are available) in the 2000s was around 1 percent of GDP, but in developing economies it averages only half of that (Bahl and Martínez-Vázquez, 2008). There is considerable scope to exploit this tax more fully, both as a revenue source and as a redistributive instrument, although effective implementation will require a sizable investment in administrative infrastructure, particularly in developing economies (Norregaard, 2013).

We summed this up as follows: “if you are buying a house, enjoy the low mortgage (for now… and don’t forget – if and when the time comes to sell, the buyer better be able to afford your selling price and the monthly mortgage payment should the 30 Year mortgage rise from the current 4.2% to 6%, 7% or much higher, which all those who forecast an improving economy hope happens), but what will really determine the affordability of that piece of property you have your eyes set on, are the property taxes. Because they are about to skyrocket.”

Sure enough, a week later the Telegraph reports that UK Treasury officials have begun work on a mansion tax that could be levied as soon as next year, citing  a Cabinet minister.

“Danny Alexander, the Liberal Democrat Chief Secretary to the Treasury, told The Telegraph that officials had done “a lot of work” on the best way to impose the charge. The preparatory work would mean that a Government elected next year might be able to introduce the charge soon after taking office.  Mr Alexander said there was growing political support for a tax on expensive houses, saying owners should pay more to help balance the books.

After all it’s only fair. It is also only fair, for now, to only tax the uber-rich, who are so defined merely in the eye of the populist beholder. However, said definition tends to be fluid, and what will be a tax on, i.e., £2  million properties tomorrow, will be lowered to £1  million, £500,000 and so on, in 2, 3, etc, years.

And in a world which as Zero Hedge first defined years ago as shaped by the “fairness doctrine“, the one word that was so far missing from this article, can be found momentarily:

“There’s a consensus among the public that a modest additional levy on higher value properties is a fair and reasonable thing to do in the context of further deficit reduction,” he said. “It’s important that the burden is shared.”

There you have it: “fair.” Because there is nothing quite like shaping fiscal (and monetary) policy based on what the du jour definition of fair is to 1 person… or a billion. Especially if that billion has a vote in the “democratic” process.

Mr Alexander said the new tax would not be “punitive” and insisted that the Lib Dems remained in favour of wealth creation.

So if it’s not “punitive” it must be… rewarding? And how long until the definition of fair, far short of the projected tax windfall, is expanded to include more and more, until those who were previously for the “fair” tax, suddenly become ensnared by it? As for wealth creation, perhaps in addition to the fairness doctrine it is time to be honest about what socialism really means: “wealth redistribution.”

That may be a seen as a challenge to Vince Cable, the Business Secretary, who first called for the mansion tax and has criticised high earners.

The Lib Dems and Labour are both in favour of a tax on expensive houses. Labour says the money raised could fund a new lower 10p rate of income tax.

The Lib Dems have suggested that the tax should fall on houses valued at £2  million and more.

The Treasury last year estimated that about 55,000 homes are in that range, though the Lib Dems say the figure is closer to 70,000.

To be sure not everyone is for the tax:

David Cameron has opposed a mansion tax but George Osborne, the Chancellor, is said to be more open to the idea. Most of the homes that might be affected are in London and the south-east of England.

Boris Johnson, the Tory Mayor of London, promised last week to oppose any move towards the tax, which he described as “brutally unfair on people who happen to be living in family homes”.

Some critics have questioned the practicality of the policy, asking how the State would arrive at valuations for houses.

Well, they will simply draw a redline above any number they deem “unfair”, duh. As for the London housing bubble, it may have finally popped, now that all those who bought mansions in London will “suddenly” find themselves at the “fair tax” mercy of yet another wealth redistributionist government.

Unfortunately, for the UK, the “mansion tax” idea, , gloriously populist as it may be, may be too little too late.

As we reported late last week in “The Music Just Ended: “Wealthy” Chinese Are Liquidating Offshore Luxury Homes In Scramble For Cash“, the Chinese offshore real estate buying juggernaut has now ended courtesy of what appears to be China’s credit bubble bursting. So if the liquidation wave truly picks up, and since there is no greater fool left (you can forget about sanctioned Russian oligarchs investing more cash in the City in a world where asset freezes and confiscations are all too real), very soon London may find that there is nobody in the “fair” real estate taxation category left to tax.

But that’s ok – because that’s when one simply expands the definition of what is fair to include the not so wealthy… and then again…. and again.

Finally, if anyone is still confused, the IMF-proposed “mansion tax” is most certainly coming to the US, and every other insolvent “developed world” nation, next. 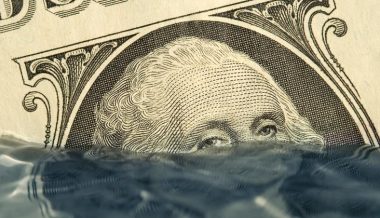