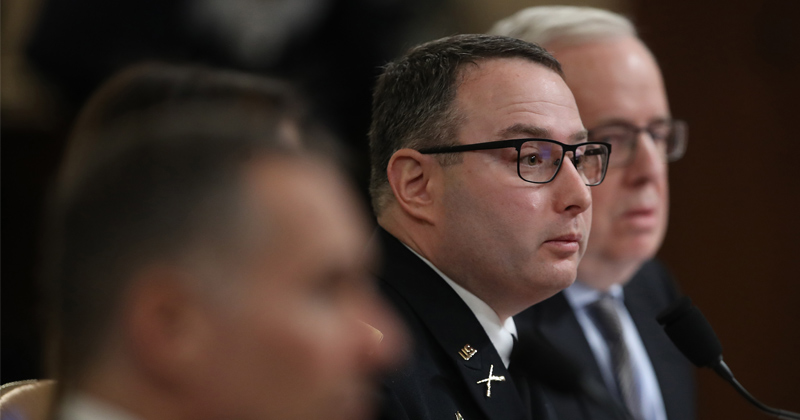 The US Constitution clearly says that the president creates foreign policy. Listening to the impeachment hearings, however, one might be tempted to think it’s really the “interagency consensus” or National Security Council staff.

With all due respect to Vice President Mike Pence’s adviser Jennifer Williams, the real “star” of Tuesday’s Schiff Show was Lieutenant Colonel – and don’t you forget that! – Alexander Semyon Vindman, the “top Ukraine expert” on the NSC.

Vindman emphasized his military service and immigrant background as a shield from criticism, and even admitted he wore his uniform in response to “attacks” on Twitter. His vast Ukraine expertise, he argued, qualified him to judge that US President Donald Trump asking Ukrainian President Volodymyr Zelensky to look into Ukraine’s possible role in 2016 US election meddling, or former VP Joe Biden and his son’s service on a corrupt Ukrainian company’s board, was inappropriate.

To use his words from an earlier deposition, it was “inconsistent with the consensus views of the interagency.” Vindman also lamented that the president did not follow the “talking points” about corruption drawn up by the NSC staff before the Zelensky phone call.

There is only one, tiny little problem, that Vindman himself was forced to admit under examination by Rep. Elise Stefanik (R-New York): it is the president who actually sets US foreign policy, and “interagency consensus” – whatever that may be – is not.

Under the Constitution, the President of the United States determines US foreign policy,” is how the official State Department page describing the Secretary of State’s duties puts it. Last anyone checked, and however many people apparently hate that fact and have vowed to resist it, that president is one Donald J. Trump – not Alexander S. Vindman.

That ought to be the end of the story, at least until the American electorate has a chance to decide on the question again in less than a year. Yet here are Vindman, Williams, and last week’s parade of bow-tied legacy bureaucrats arguing that no, Trump’s shooting from the hip is improper, violates norms and practices, might hurt Ukraine, and just isn’t done in Washington. Doesn’t he realize who they are?

It’s remarkable how people who believe they possess such fantastic mind-reading powers to discern clearly and precisely just what Trump’s words really meant – even when they heard of them second- or third-hand – never bothered to pay attention to his campaign platform, where he vowed to “drain the swamp” and change the way things were done in Washington.

Tempting as it may be to focus on the “gotcha” moments of Tuesday’s hearing, from Vindman arguing that he was too busy to follow the chain of command after the July phone call (!) to the frantic efforts of House Intelligence Committee chairman Adam Schiff (D-California) to shut down any possible mention of the “whistleblower” – the person whose complaint launched the entire process, but who clearly got the information from Vindman – that would be about as pointless as the hearing itself.

Ukraine is neither a treaty ally of the US nor a sacred cow. It did receive every penny of the aid designated by Congress, before the statutory deadline. All the Ukrainian officials from Zelensky on down have sworn they were never pressured into anything by Trump or his aides.

Instead, what has emerged is a 2018 letter from Democrats demanding Ukraine aid the Mueller investigation, and an account of Sen. Chris Murphy (D-Connecticut), one of the main supporters of the 2014 Maidan coup, telling Zelensky he should not “respond to requests from American political actors” lest he lose Democrat support in Congress. So much for the talk about anti-corruption efforts, or the US respecting their sovereignty – a joke if ever there was one.

When all is said and done, the entire word-thinking, mind-reading, dog-whistling construction being assembled in the House and the media resembles nothing more than ‘Russiagate,’ that debunked conspiracy theory Schiff himself spent years pushing with impunity.