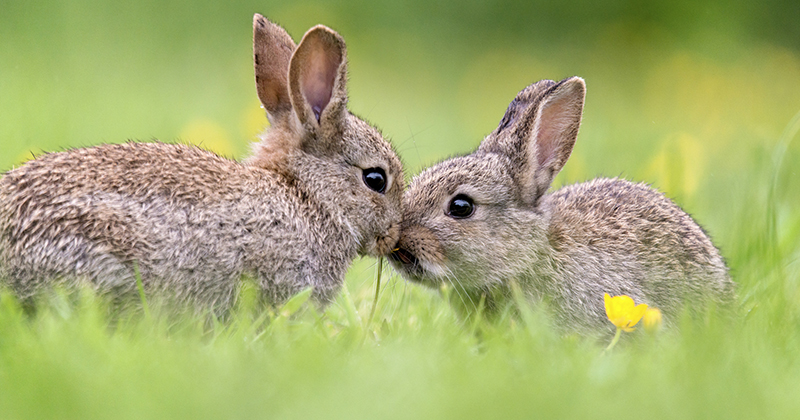 In 2020, it has just been one thing after another.

The COVID-19 pandemic has paralyzed countries all over the globe, there has been tremendous rioting, looting and civil unrest in major U.S. cities, and millions of Americans have lost their jobs as we have plunged into the worst economic downturn since the Great Depression of the 1930s.

It has been such a challenging year, and we certainly don’t need any more problems, but now there is one more crisis that we can add to the list.

An outbreak of a virus that is known as “bunny ebola” erupted in the southwestern United States in April, and since that time it has “moved like mad” from one location to another.

At this point, cases have been confirmed at 146 different locations in the states of Arizona, California, Colorado, Nevada, New Mexico, Texas, and Utah.

The good news is that this virus does not infect humans, but it is absolutely deadly for rabbits, hares, and pikas.

Thousands have already died, and it appears that this pandemic is just getting started.

Once rabbits start exhibiting symptoms, it is usually already too late to do anything.  According to one expert in New York, the cases that he personally witnessed earlier this year all ended horribly…

“Someone saw them spasming and yelled,” recalled Lorelei D’Avolio, LVM, a certified veterinary practice manager with a veterinary-technician specialty in exotics at the Center for Avian and Exotic Medicine in Manhattan. “We tried to do CPR, but these rabbits were dead within minutes. They would convulse, scream horribly, and die.”

The last sentence in that quote really hit me hard when I first read it, and I am sure that many of you are having the exact same reaction.

What a terrible, terrible way to go.

The USDA says that the incubation period for this virus is between three and nine days, and it is estimated that 50 to 70 percent of those that get infected end up dead.

The virus viciously attacks internal organs, and the hemorrhaging that it often causes is the reason why it has been dubbed “bunny ebola”, but this virus is not actually related to Ebola at all.  The following comes from the New York Daily News…

Though the quick-moving virus is “not related in any way, shape, or form” to Ebola, the ways in which it damages the body — including system-wide inflammation and in many cases, hemorrhaging — appear similar.

In addition to destroying liver cells and causing hepatitis, the virus leads to lesions on organs like the heart or lungs which result in internal bleeding.

In recent months, we have seen how rapidly a highly infectious virus can spread.  From just a handful of cases in China, COVID-19 has spread all over the globe in just a matter of months, and at this point there are more than 11 million confirmed cases.

The outbreak comes amid the coronavirus pandemic plaguing the human population but RHDV2 is “way more infectious,” Lorelei D’Avolio, a certified veterinary practice manager at Manhattan’s Center for Avian and Exotic Medicine, told the The Cut.

“It’s way more persistent, it’s resistant to extreme temperatures, it can be transmitted on bugs, on carcasses. It can spread on water, it can be spread on shoes.”

Once this virus is introduced into a community of rabbits, it is almost inevitable that they are all going to get it.

According to New Mexico State Veterinarian Ralph Zimmerman, one individual in his state lost every single one of his 200 rabbits to the virus “between a Friday afternoon and Sunday evening”…

“We had one guy with 200 rabbits, and he lost them all between a Friday afternoon and Sunday evening,” Zimmerman said. “It just went through and killed everything.”

Can you imagine how he must have felt watching his rabbits all die one after another?

Thankfully, humans cannot catch this virus, but other pestilences that do affect humans have been popping up all over the globe.  As Ricky Scaparo has pointed out, there have been cases of Bubonic plague in Mongolia and China in recent days, and doctors have confirmed that a “brain-eating amoeba” attacked a patient in Tampa, Florida.  Such amoebas are usually found in lakes, rivers and hot springs, and so if you live in the Tampa area you may want to be careful where you go swimming for a while.

And I definitely don’t want to forget to mention the most catastrophic pestilence that we have seen in the last few years.  According to the New York Times, African Swine Fever killed one-quarter of the world’s pigs in just 12 months, and it continues to spread rapidly all over the planet.

It is almost as if the natural world has started to go absolutely nuts.

The COVID-19 pandemic should be a major league wake up call for all of us.  It has shown us how extremely vulnerable we truly are, and if a relatively minor pandemic can cause this much chaos, what sort of damage would a truly catastrophic global pandemic cause?

And scientists assure us that it is just a matter of time before we are hit by a massive global pandemic that will kill millions.

So let us be thankful that humans cannot catch “bunny ebola”, but let us also be mindful of the fact that the clock is ticking.

At some point a pandemic that is much worse than COVID-19 will arrive, and once it strikes the death toll will be off the charts and it will completely and utterly paralyze our entire society.