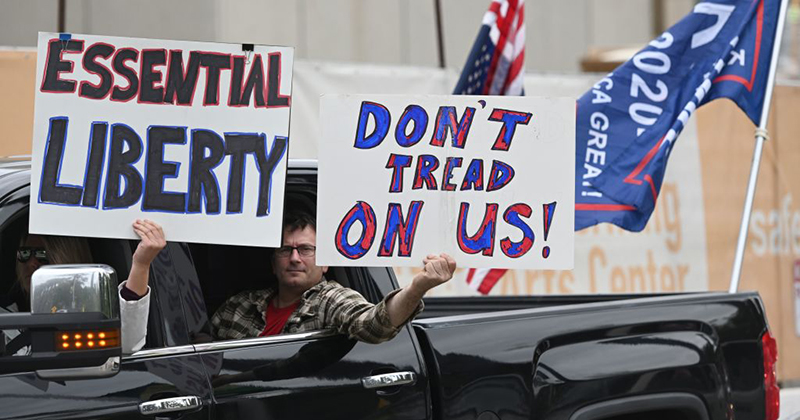 The fact that a number of states are preparing to “reopen” their economies has created a wave of optimism in recent days, and most Americans are assuming that things could start “getting back to normal” in just a matter of weeks.

But that is not true at all.  As you will see below, some of our biggest states are planning multi-stage “reopenings” that will unfold over many months.

And if a new wave of infections starts to erupt, they will just lock everything down again.

So even in a best case scenario, life is not going to return to “normal” for the foreseeable future, and it is entirely possible that some restrictions could remain in place well into 2021.

Josh Ellis joins Owen to discuss the upcoming “American Revolution 2.0” march on May 1st at capitols nationwide! Join him and other patriots as they stand up for liberty and the American constitution!

Let’s break this down one step at a time.  In California, Governor Newsom just announced that there will be a four stage “reopening” process in his state, and he is openly admitting that stage 3 is months away…

The next phase, Stage 3, is “months, not weeks, away,” Newsom said.

That stage will encompass personal care businesses like gyms, spas and salons, sports without live audiences, in-person religious services and other businesses where workers come in close contact with customers.

And the final phase, Stage 4, will see the end of the stay-at-home order with the reopening of the “highest risk parts of our economy” being reopened, Newsom said on Twitter. That includes concerts, convention centers and sports with live crowds.

If stage 3 is not going to arrive until “months” from now, when will we finally see stage 4?

And considering the fact that California is home to so many professional sports teams, what is all of this going to mean for the NFL, the NBA and Major League Baseball?

If the NFL season ends up getting delayed or canceled, I will be very upset about that.

Unfortunately, Newsom seems quite determined to stay the course, and he is promising that life will never fully return to normal for residents of his state “until we get to immunity or a vaccine”…

“We are not going back to the way things were until we get to immunity or a vaccine,” Newsom said. “We will base reopening plans on facts and data, not on ideology. Not what we want. Not what we hope.”

As I have discussed previously, it is extremely unlikely that “herd immunity” will be achieved in this country until 2021 at the earliest.

And there has never been a successful vaccine for any coronavirus in all of human history.

So if Newsom is serious, it appears that economic activity will be greatly depressed in the state of California for a long time to come.

Phase two would involved a business-by-business analysis, asking how essential — and how risky — that business is to reopen.

And if cases in his state start spiking again, Cuomo has made it abundantly clear that he is more than ready to shut everything back down again…

As New York prepares to let businesses reopen with the easing of the coronavirus pandemic, the state will have measures in place that will signal another outbreak of the disease and the need to curb activity once again, Gov. Andrew Cuomo said Tuesday.

In particular, Mr. Cuomo said that if either the hospital system in an area of the state hits 70% of capacity or if the rate of transmission reaches 1.1—meaning for every person who has the virus, another 1.1 are infected—that would constitute what he called a “circuit breaker.”

Needless to say, all of this is completely nuts, and it certainly feels like the inmates are running the asylum at this point.

No matter what we do, this virus is going to keep spreading, and most Americans are eventually going to get it.  These lockdowns can delay the inevitable, but they can’t stop it.

Unfortunately, decision makers all over America are completely paralyzed by fear of this virus, and that is resulting in some very strange outcomes.  For example, Harvard is already warning that the upcoming fall semester may be conducted “without students on campus”…

Harvard University announced Monday that, given the uncertainty caused by the coronavirus pandemic, it is leaving the door open for a fall semester without students on campus.

“We cannot be certain that it will be safe to resume all usual activities” by autumn, university provost Alan Garber wrote in a note to the school Monday. “Consequently, we will need to prepare for a scenario in which much or all learning will be conducted remotely.”

We truly have become a nation of “snowflakes”, and fear of this virus is going to paralyze some portions of the nation for a long time to come.

But the truth is that we can’t keep Americans confined to their homes indefinitely.  As I pointed out yesterday, people are already starting to venture out of their homes more frequently, and one new survey indicates that a lot of Americans are going to reach their “breaking points” if restrictions are not lifted soon…

In all, 1,895 U.S. citizens over the age of 18 were surveyed earlier this month, and 72% said they expect to reach a “breaking point” by mid-June if stay-at-home orders aren’t lifted. In fact, 100% of respondents said they would snap if this all lasts for longer than six months. The survey was conducted between April 3rd and 6th, and at that time, 16% said they had already hit their breaking point, with that number rising to 25% within the next two weeks. That would indicate that one in four Americans have likely reached wits’ end by now.

If you are elderly, have a compromised immune system or are in some other high risk group, it is going to be important for you to continue to quarantine yourself.

But the rest of the country needs to get back to work.  More than 26 million Americans have filed for unemployment benefits during this crisis so far, and a new Gallup survey discovered that about a third of all Americans have lost income due to the coronavirus…

Nearly one in three Americans have experienced a temporary layoff, permanent job loss, reduction in hours, or reduction of income as a result of the coronavirus situation. Eighteen percent have experienced more than one of these disruptions.

We are seeing so much suffering out there right now, and people deserve a chance to make a living.  According to a report that was just released, 31 percent of all Americans have already “cut spending on food” during this crisis, and that is a very alarming number.

In fact, we won’t ever get to the point of “herd immunity” until most of the population catches this virus, and that is going to take some time to happen.

But meanwhile, these lockdowns are causing our economy to come apart at the seams and the stage is being set for great civil unrest.

I understand that it would not be easy, but we need to try to move forward as a nation.

Unfortunately, the “multi-stage reopenings” that some of these governors have dreamed up will hold us back for many months to come and will greatly extend our economic suffering.

Elections have consequences, and the truth is that a lot of these governors should not even be trusted with mopping the floors at a local Dairy Queen.  But now they are the ones running the show, and the decisions that they are making are going to be very painful for all of us.