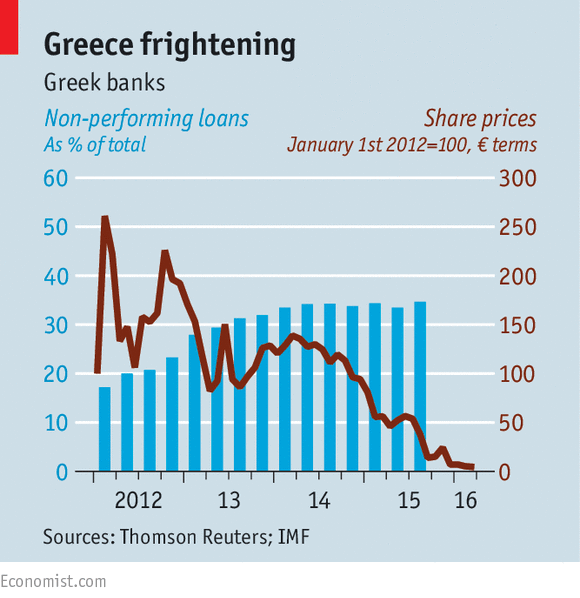 ON THE face of things, Greece’s four big banks are in their best shape in years. In November they received their third bail-out in as many years. The extra €14.4 billion ($15.9 billion) they got then (some of it from private investors) raised their capital ratios to 18%, well above the European average of 13%. Recent legal changes make it easier for them to repossess collateral and to sell loans to third parties. Better yet, recent data suggest the economy shrank by only 0.2% last year, much less than initially feared. The Bank of Greece predicts that growth could return as early as this summer. After eight years of crisis and recession, normality at last seems within reach.

But beneath the cushion of fresh capital, cracks remain. Greek banks are still losing money. Piraeus Bank, the country’s second-largest lender, this week reported a net loss of €1.9 billion in 2015. Deposits have barely begun to grow again after last year’s run; the capital controls it prompted remain in place. Fully 40% of loans and 55% of mortgages are not being paid down, compared with a European average of 5%. Big losses on non-performing loans (NPLs) and debt securities could erode the banks’ capital once again. Greece is rowing with the other members of the euro zone about the conditions of its bail-out, raising the spectre of another crisis. A fourth recapitalisation is not out of the question, says Josu Fabo of Fitch, a rating agency. The markets remain nervous: bank shares are down by 36% since the start of the year.

The banks are largely innocent bystanders in the endless back and forth between the Greek government and its creditors, but they are guilty of procrastination when it comes to their NPLs. Instead of restructuring the loans worth saving, calling the bluff of defaulters that could probably pay, and reclaiming and selling the collateral of the hopeless cases, they are counting on a return to growth to rescue delinquent borrowers. That, in turn, is impeding the flow of capital to ventures that might help revive the economy. Yannis Stournaras, the head of the central bank, recently demanded “bold and innovative initiatives” to clean up bad loans. “This cannot be ensured by the current ‘business as usual’ approach,” he added.