Following the highly scrutinized meeting between President Barack Obama and Prime Minister Benjamin Netanyahu earlier this month in Washington, consensus held that Obama had managed to secure assurances from the war-hungry Netanyahu that Israel would delay a military strike against Iran till 2013.  That is, till after the November U.S. presidential election. 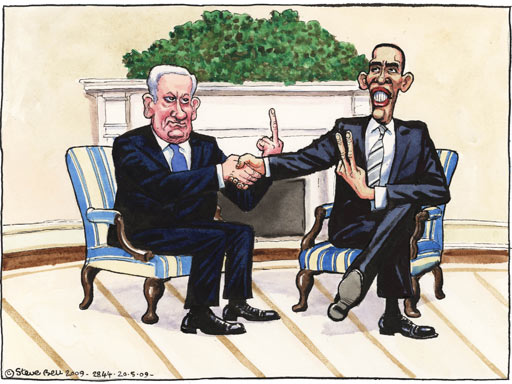 According to the Israeli daily Maariv, this commitment of Israeli “restraint” had been bought with the sale of U.S. “advanced bunker-busting bombs and long-range refueling planes” to the Israeli Defense Forces, as al-Akhbar (3/8) reported.  Needless to say, such advanced weaponry would be required in any Israeli attack on Iran.

“You shall still have your war,” Obama thus seemingly sought to convey to Netanyahu, “but only in due time.”

Since the Obama-Netanyahu summit, however, indications of such Israeli restraint have dissipated.  The Israeli dogs of war are not so easily tamed.  In fact, in his latest column for Bloomberg (3/19), the Atlantic’s Jeffrey Goldberg reports that talk of striking Iran is once more convulsing through the Israeli political establishment.  And according to Goldberg, all such discussions have assumed a rather optimistic bent.

“One conclusion key officials have reached,” Goldberg writes, “is that a strike on six or eight Iranian facilities will not lead, as is generally assumed, to all-out war.”

We learn further that Israeli officials interpret Obama’s claims of “having Israel’s back” as meaning that even in the event of an Israeli strike against Iran in the face of U.S. protest, “Obama would move immediately to help buttress Israel’s defenses against an Iranian counterstrike.”

All this leaves Goldberg to assess that Israel shall ultimately strike Iran.  As he writes, “I’m highly confident that Netanyahu isn’t bluffing—that he is in fact counting down to the day when he will authorize a strike against a half-dozen or more Iranian nuclear sites.”

This unnerving assessment mirrors that held by another favored media conduit for Israeli propaganda, Ronen Bergman, who after similarly speaking with senior Israeli leaders earlier this year, concluded in the New York Times Magazine (1/25) that,  “Israel will indeed strike Iran in 2012.”

Notably, Goldberg’s Bloomberg piece appeared the very day the New York Times (3/19) reported on a secret U.S. war game held earlier this month.  The war game reportedly simulated an Israeli strike on Iranian nuclear facilities.  And as the Times reported, the exercise “forecasts that the strike would lead to a wider regional war, which could draw in the United States and leave hundreds of Americans dead.”

(The report did not specify to any detail on the expected regional war unleashed by an Israeli strike.  Nor did the paper mention any projection of potential Iranian casualties.  But why would they?  After all, as U.S. Gen. Tommy Franks averred back in 2002: “We don’t do body counts.”)


And of course, where there is smoke, there is fire.


Indeed, for the Times ominously noted that a similar exercise took place back in December 2002—at the time simulating a potential invasion of Iraq.  And mere months later, as Peter Symonds, writing at the World Socialist Web Site (3/21), reminds us, “US President George Bush unleashed the illegal US-led war of aggression that cost the lives of hundreds of thousands of Iraqi civilians and devastated much of the country.”

Hence amid its war gaming, the Pentagon continues to accelerate its naval build-up in the Persian Gulf, according to the Los Angeles Times (3/17) and other outlets.  The Times writes:


The U.S. presently has three aircraft carriers (the USS Carl Vinson, the USS John Stennis, and the USS Abraham Lincoln) and their accompanying striker groups on patrol in the Persian Gulf.  And lest one forgets, the U.S. Navy’s 5th Fleet remains stationed in Bahrain.

Coinciding with this massive accumulation of military hardware assembled at Iran’s door has been an escalation of U.S. threats of military assault.  In fact, according to the Russian daily Kommersant, the U.S. has indirectly sent a warning to Tehran that the upcoming six-party talks on Iran’s nuclear program, to be held April 15 in Turkey, represent Tehran’s “last chance” to avoid a U.S. military strike.  As the Christian Science Monitor (3/14) reports, “US Secretary of State Hillary Clinton asked Russian Foreign Minister Sergei Lavrov at a UN Security Council session on March 12 to deliver that tough missive to Tehran.”

President Obama personally conveyed much the same message in a joint press conference held with British Prime Minister David Cameron earlier this month.  As the president stated, “the window for solving this issue [the Iranian nuclear crisis] diplomatically is shrinking.”

Such talk of a shrinking diplomatic window comes as it is confirmed–yet again–that Iran is not even pursuing nuclear weapons.  “Despite saber-rattling from Jerusalem,” the Associated Press (3/18) reports, “Israeli officials now agree with the U.S. assessment that Tehran has not yet decided on the actual construction of a nuclear bomb.”

Likewise, Reuters states (3/23), “Current and former U.S. officials say they are confident that Iran has no secret uranium-enrichment site outside the purview of U.N. nuclear inspections.”

Meanwhile, the Iranian government has continued to declare its disdain for nuclear weapons.  Speaking in late April, Ajatollah Ali Kahamenei reconfirmed his fatwa against nuclear weapons, declaring in part: “We believe that using nuclear weapons is haraam and prohibited and that it is everybody’s duty to make efforts to protect humanity against this great disaster.”  And in an interview with German television earlier this month, President Mahmoud Ahmadinejad similarly declared that nuclear weapons “belong to the past.”

That said, the French news agency AFP (3/20) reports that Russian Foreign Minister Lavrov has warned that if Iran were to be attacked, it would have no choice but to develop nuclear weapons.  As Lavrov stated, “I am almost certain that such a decision will surely be taken after (any) strikes on Iran,”

But, as it ought to be abundantly clear, the present standoff with Iran is motivated not by its imagined nuclear weapons program.  Rather, the menace of nuclear proliferation is but a veil used by the militarist regimes residing in the U.S. and Israel to obscure their insatiable appetites for war.  And as history has proven, this appetite is unmoved by official state intelligence, let alone a regard for human life.

No doubt then, dark days lie ahead.