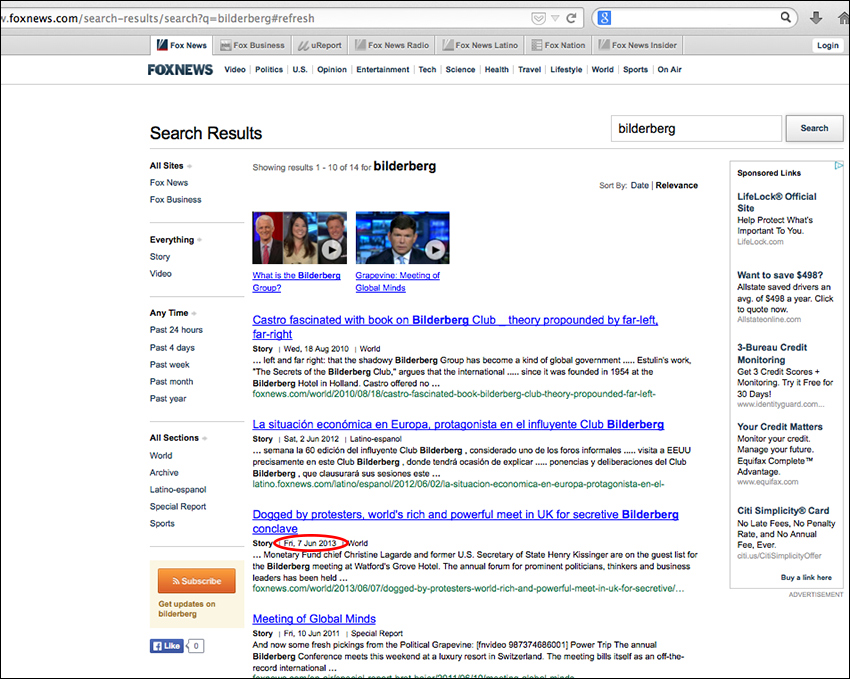 It is with predictable disappointment to announce all four networks failed to inform the public of a secretive and extremely exclusive meeting of central bankers, CEOs, public officials and world dignitaries taking place this weekend.

From May 29 through today, June 1, esteemed academicians, hand picked journalists, intelligence officials, world banking oligarchs and the CEOs and bosses of Royal Dutch Shell, Google and Microsoft, to name just a few, slinked behind closed doors at the Marriott hotel in Copenhagen, Denmark, to do God knows what.

With the conference now into its fourth and final day, one would expect at least a trickle of articles from the mainstream press regarding Bilderberg 2014, if at the least to perform the routine mock, shame and ridicule of “tin foil hat wearing conspiracy theorists” claiming participants are working towards a “new world order.”

Is it a rule in MSM that any Bilderberg coverage has to include the words “tin foil hat” or “lizard” in the first paragraph?

While past meetings have been afforded at least some press, this year neither of the four networks opted to cover Bilderberg 2014.

NBC was most upfront about it:

Other networks have awarded the meeting of elite power brokers press in the past, but for some reason didn’t find this year’s globalist shindig quite as enticing (click to enlarge): 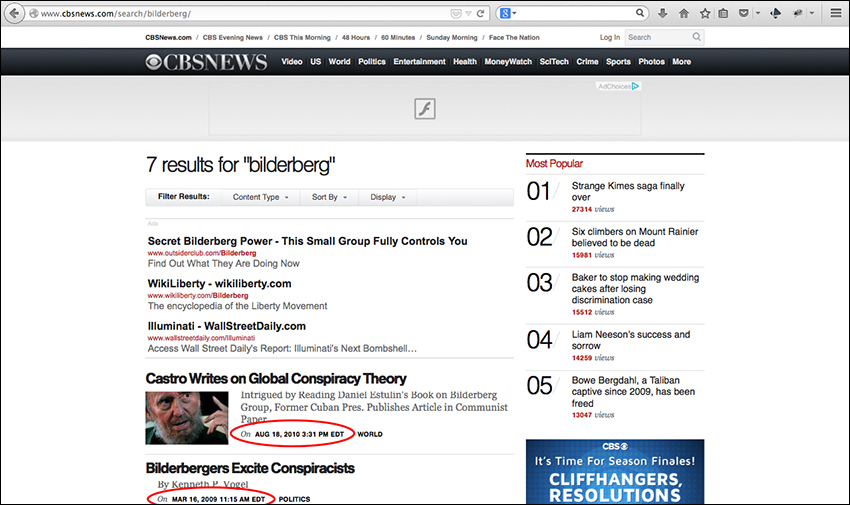 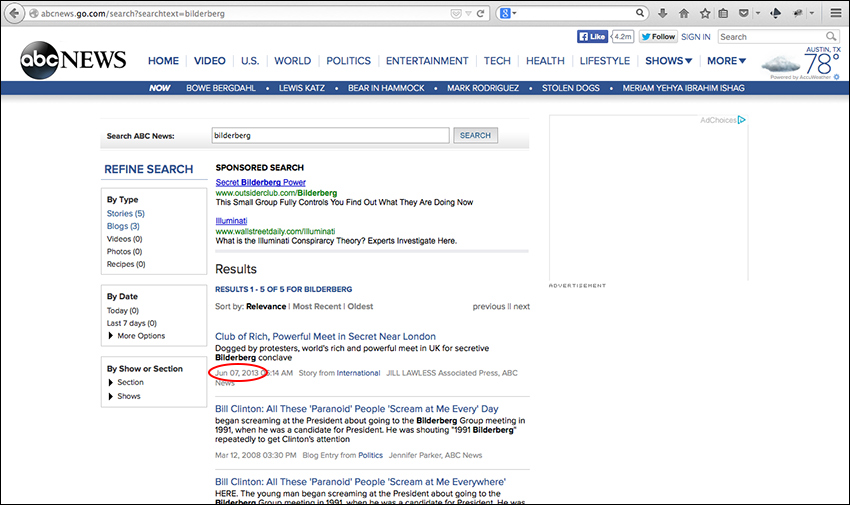 Indeed, the degree to which all four networks uniformly ignored the matter is a curious coincidence, leaving the door open for skeptics to argue they’ve been handed specific orders to disregard the assembly, colluding to perform what’s termed a “media blackout.”

“The reason they want secrecy is because they’re doing evil,” explained late veteran Bilderberg investigative journalist Jim Tucker. For decades, Tucker did tireless work attempting to expose the group, following them to multiple meeting locations around the globe and reporting on leaks concerning their un-official agendas. “Evil is done under the cover of darkness, good works are done in the sunshine.”

But surely, you ask, the top cable news network in the country, CNN, can devote at least a fraction of time or webspace to cover this important meeting? Nope. Are you kidding? They’re busy worrying about the next Clippers owner. 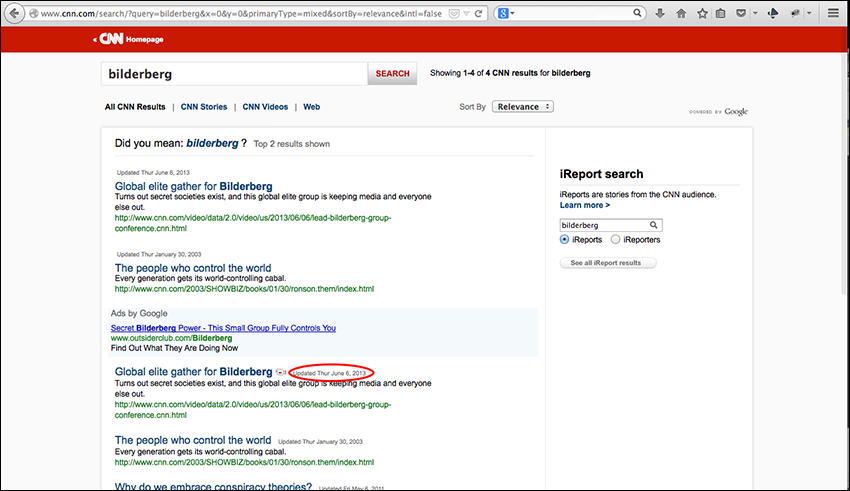 To be fair, one of their hired propagandists, Jake Tapper, did do a superficial, surface report on the conference – last year – putting Bilderberg protestors on the same level as “bigfoot believers” and labeling Alex Jones a “provocateur.”

But surely the newspaper that carries “all the news that’s fit to print” would deem a meeting of elite power brokers “news”? Nope. Not this year.. Maybe that’s because some of its editors have attended past meetings.

“On its face, it makes no sense the corporate media would ignore and fail to report a confab comprised of newsworthy royal elites, chancellors, prime ministers, presidents, ambassadors, secretaries of state, Wall street bankers and investors, CEOs of transnational corporations, and corporate media executives,” writes Kurt Nimmo. “It makes no sense — that is until you realize the corporate media is owned and directed by this very same elite. In the past, darlings of the corporate media have attended Bilderberg meetings, including the late Peter Jennings of ABC, Joseph C. Harsch of NBC, the “liberal” Bill Moyers of PBS, the ‘conservative’ William F. Buckley, Jr., Robert L. Bartley of the Wall Street Journal, the neocon William Kristol, Thomas L. Friedman of the New York Times, the late Katharine Graham of the CIA’s favorite newspaper, the Washington Post, Leslie Stahl of CBS, and many others. Many are also members of the CFR and the Trilateral Commission.”

“Jim Tucker puts it best,” writes Michael Collins Piper for American Free Press. “If 140 of the world’s best known baseball players or movie stars gathered secretly under armed guard at an exclusive resort for an entire weekend, every major newspaper and magazine and all of the tabloids would be on hand, clamoring to get inside, demanding to know what was going on behind those closed doors. All of the television gossip shows would be chatting about it regularly. The whole world would know about that secret meeting in a heartbeat.”

Besides a limited number of American sites, and American sites owned by foreign governments, mainstream Bilderberg coverage this year has hovered around zero, a further indication of the dying dinosaur media’s increasing irrelevance.

But even if journalists ventured to Denmark, which Infowars reporters did, they wouldn’t get very far. Taxpayer-funded armed security details keep a 24-hour guard, huge eyesore fences block nosy journalists out and invitees are strictly forbidden from revealing anything discussed at meetings. Secrecy always trumps transparency at Bilderberg.

“I don’t think they’re happy about it, they prefer nothing at all, no publicity, they prefer absolute secrecy,” Tucker said in an interview, commenting on Bilderberg’s sentiments toward the growing media interest garnered in recent years.

The Bilderberg Group recently worked up the courage to put up a website.

This gesture was in all likelihood spurred by incessant coverage from independent and social media, but it could also mean the group is now confident enough in their plans to move out from behind the curtain.

But then again, maybe there is hope after all: