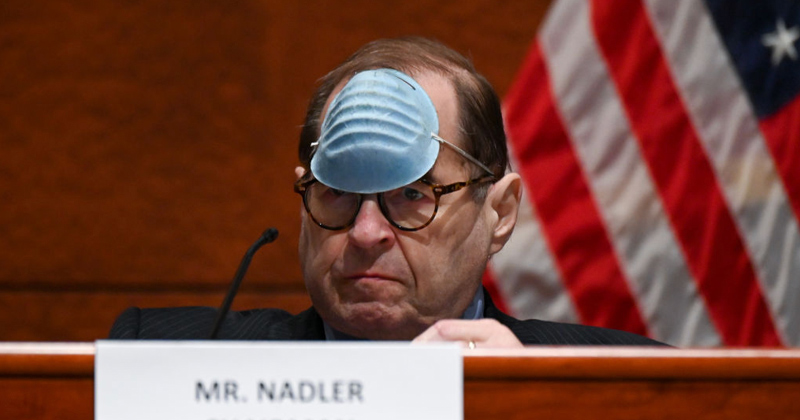 House Judiciary Committee Chairman Jerry Nadler (D-NY) refused to call on a rep in the House chamber Wednesday due to the congressman’s lack of a face mask.

Nadler made a spectacle on the House floor Wednesday, repeatedly refusing to recognize Rep. Tom McClintock (R-Cali.) after he would not don an earloop face covering which Democrats had made mandatory earlier that day.

.@RepJerryNadler announces he won't recognize any members who do not wear a mask.

From there, things go OFF THE RAILS.pic.twitter.com/PQ3NAFQhj4

“The attending physician of the house has said that it is imperative for the health and safety of the people in this room that members wear masks,” Nadler said.

“I’ve been greatly lenient today, however I will tell you now that anyone not wearing a mask will not be recognized to speak, period,” Nadler told the room, going on to ignore Rep. McClintock.

At this point, Rep. Jim Jordan (R-Ohio) speaks up on the microphone saying, “McClintock has tried repeatedly to make his point… It’s our side. You just had a Democrat speak. It’s our turn.”

Initially refusing to recognize McClintock, Nadler argued, “I have a duty and a responsibility to maintain order and decorum in our proceedings, which includes making sure that we conduct our business in as safe a manner.”

After briefly putting the mask over his face, Rep. McClintock tells Nadler, “You choose to wear a mask, sir. I do not. I ask you to respect my choice, as I respect yours. I consider masks much more effective at spreading panic and much less effective at stopping a virus…”