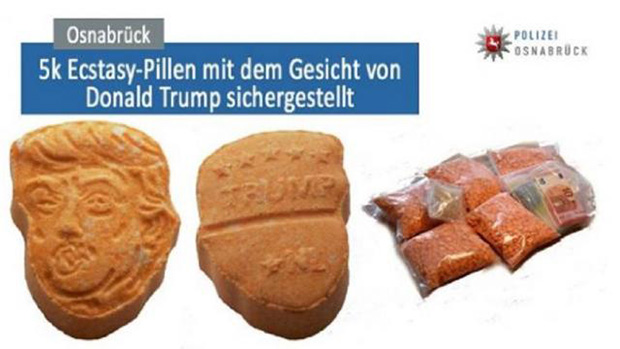 Police in Indiana say they have seized ecstasy pills in the shape of U.S. President Donald Trump.

The tablets feature the president’s face as well as the phrase “Great Again,” a reference to the “Make American Great Again” slogan, on the reverse side, according to a press release from the Indiana State Police.

The drugs were found during “Operation Blue Anvil,” a six-day operation ran by 9 departments last month that resulted in 129 criminal arrests on 272 drug-related charges.

Analysis of what appears to be the same tablet from EcstasyData.org, an independent laboratory pill testing program, found the main ingredients to be MDMA, Caffeine and Amphetamines.

Those pills, however, differed slightly in appearance with the word “Trump” featured on the back side.

EcstacyData.org notes that the European Trump pill comes with an “extreme high dose” warning due to the tablet containing more than 200mg of MDMA.