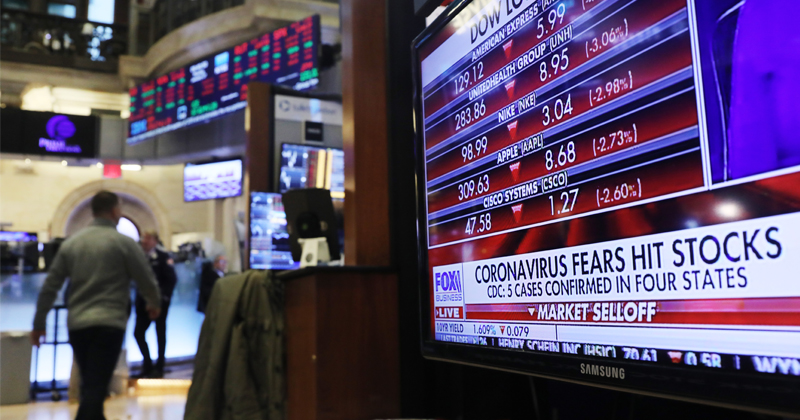 The spread of coronavirus in China has made markets jittery.

Stocks have gone into a slide and gold has pushed up on safe-haven buying. Last week, Peter Schiff appeared on RT Boom Bust to talk about it. He said that 2020 may well be a bad year for the stock market, but probably not because of the virus.

The real problem is markets are overvalued and the air will eventually come out of the bubble.

“Look, obviously, it’s too early to tell if there’ll be any kind of impact or meaningful impact on global trade, GDP, or the markets as a result of this virus.”

Peter said the real issue is that the stock market is extremely overvalued. The question is why isn’t it coming down?

“It should be coming down. The only thing really supporting it is the Federal Reserve and all the money they’re printing with their stealth QE program, although it’s not stealth really. Everybody knows they’re doing it. They just refuse to admit it. But there’re no earnings behind this. There’s no strong economy behind this. This is an inflation-driven bubble, but the air should be coming out.”

The conversation turned to the auto market. The price of palladium has surged in recent months due to increased demand for the metal in catalytic converters. Will the auto market hold up? Peter said you have to look globally. There will always be demand for cars — especially in emerging markets. The question is can people afford them?

“I think there’s going to be a lot of growth outside the United States in the auto sector. I think the US auto sector is another bubble that was made possible by the Fed. You have Americans who are buying cars with seven or eight-year loans, where they’re lying about their incomes just to qualify. So, I think you have a dangerous aut0-bubble here. So, I think you’re going to see a contraction in the US market. But that’s not the case in foreign markets. particularly in places like China, where people don’t borrow money to buy cars. They buy cars they can actually afford using the money they actually have.”

Trump has been threatening the EU with auto tariffs. Peter said if that were to actually happen, it wouldn’t help the US. It would actually backfire. He said the US trade deficit in automobiles has little to do with unfair trade practices. The US just isn’t as competitive. Not only that, the US places all kinds of protectionist restrictions on foreign SUVs.

“When you live in glass houses, you’re not supposed to throw stones. And we haven’t been playing fair in that part of the market.”

“The last thing we want to do is escalate a trade war we can’t win.”

As far as the overall US economy goes, Peter pointed out that the manufacturing sector has been contracting for a while now. The question is when will the service sector roll over into recession?

“It’s long overdue. Obviously, there’s a lot of politics involved now in whether they can kick the can down the road long enough to kick the recession past the 2020 election. We’ll see. If they can’t do that, then I think that there’s no way Trump is going to get reelected. But even if they can do it, I still think that Trump is going to have a much harder time than the markets perceive, and I think they have yet to price in what would happen, a discount in the market for the possibility of a Bernie Sanders becoming the next president of the United States. Because this is going to be very dangerous for the US stock market … There is a lot of risk to the US economy and the US market that everybody is ignoring at the moment.