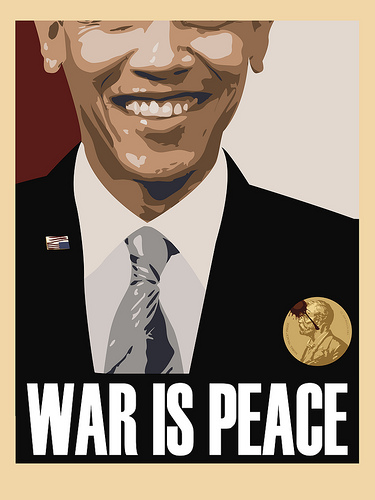 In tribute to the 995,000 people Obama has killed during his reign in the White House, Infowars has decided to award him with another Nobel Peace Prize to compliment the first prize he won under the false pretense of his “extraordinary efforts to strengthen international diplomacy and cooperation between people.”

Obama was elevated to the “peace” pantheon in 2009 along with four other unworthy US heads of state—Theodore Roosevelt, Woodrow Wilson and Jimmy Carter.

Roosevelt is known for his murderous escapade as the “rough rider” of San Juan Hill during the US invasion of Cuba in the Spanish-American War. He later formulated the Roosevelt Corollary to the Monroe Doctrine declaring the United States has the right to rule over Latin America—and anywhere it sees fit—with an iron fist.

Wilson is infamous for dragging an unwilling America into the bloodbath of the First World War, invading the Dominican Republic and Nicaragua and following up the carnage in Europe by sending troops to Venezuela. Marine General Smelly Butler would write about these murderous acts in his tract “War is a Racket.” He said during his service he acted as “high class muscle man for Big Business, for Wall Street and the bankers.”

The elder statesman Jimmy Carter pretends to be a peacemaker despite the fact he ordered the CIA into Afghanistan where a gang of serial murderers and Islamic fanatics were recruited to go up against the Soviet Union. Carter earns the dubious honor of creating al-Qaeda and the Taliban, two gangs that became perennial enemies and constitute an excuse for the state to lavish the bankers and their military-industrial complex with trillions in profit.

Obama continued and extended his predecessor’s war on terror despite his fallacious promise during the election to end the wars in Afghanistan and Iraq. Obama codified the outlaw process of drone killings and pronounced the war party has the indisputable right to conduct war anywhere in the world—along with targeted assassinations and “renditions”—as ordered by the national security state and its cartel of international financiers and corporate overlords. Obama, despite another all but forgotten election promise, has not closed down the torture camp at Guantánamo where CIA spawned terrorists and suspected terrorists waste away under the tropical sun without the benefit of due process.

Obama’s war crimes are in competition with those of George W. Bush, the neocon generalissimo who invaded Iraq and slaughtered well over a million people. Obama is responsible for empowering the Salafist maniacs who destroyed Syria. He has also armed the Islamic State, a particularly vicious spin-off of the Pentagon’s manufactured al-Qaeda resistance in Iraq.

El jefe the teleprompter reader sicced his blood-thirty Secretary of State—the presumptive president and doña of the Clinton Crime family—on the people of Libya. So titillated was Hillary with her serial murder rampage conducted in collaboration with globalist hit squad NATO she went on national television and laughed about the elimination of Gaddafi by CIA sponsored thugs. Gaddafi was raped with a knife and assassinated for his plan to create a gold dinar.

Because the horror is apparently endless—Cheney said, after all, the war on terror will last for generations, possibly forever—we at Infowars decided it is about time to present Obama with yet another award, this one in additional tribute to the killing and carnage that continues as he approaches the end of his reign.