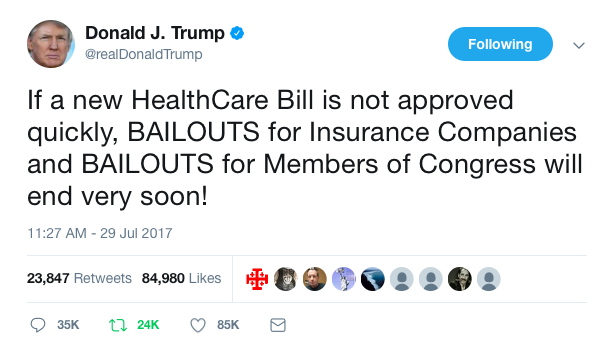 Last week, Roger Stone also was the first to predict that Reince Priebus would be removed as White House Chief-of-Staff, to be replaced by General John F. Kelly, then head of the Department of Homeland Security.

On Saturday, President Trump tweeted that if a new HealthCare Bill is not approved quickly, bailouts for insurance companies would end very soon – a threat that followed precisely what Infowars.com had predicted in the April 28 article entitled, “How President Trump Can End Obamacare with a Stroke of a Pen: He just needs to end insurance company subsidies.”

All President Trump must do to “repeal” Obamacare is sign an Executive Order instructing the Solicitor General to withdraw the Obama administration’s appeal in the federal district court case U.S. House of Representatives v. Burwell, (130 F. Supp. 3d 53, U.S. District Court for the District of Columbia, 2016).

The result will be to immediately defund the low-income insurance company subsidies being paid by the federal government under Section 1402 of the Affordable Care Act (ACA), causing Obamacare to collapse, almost immediately.

The point is Congress never funded any taxpayer funds to pay the low-income insurance subsidies that are at the heart of making Obamacare work.

What is at issue is Section 1402 of the ACA – a section written to provide federal subsidies to insurance companies for insurance purchased on state insurance exchanges to cover the difference between the capped maximum a low-income purchaser could be expected to pay and the amount the insurance cost.

Without funds provided by Congress to pay the low-income insurance subsidies under 1402, Obamacare collapses almost immediately.

No insurance company can long afford to provide low-income health insurance at a discount, unless the federal government pays the difference between what the insurance truly costs and the limited amount low-income purchasers can pay.

The problem is that Congress refused to pass an appropriation to fund Section 1402, leaving the Obama administration scrambling to find funds somewhere else in the federal budget that could be diverted to pay the low-income insurance subsidies.

Infowars.com has proved through an analysis of the Treasury Department balance sheets that the Obama administration found a solution in August 2012, when the Treasury Department decided that earnings confiscated from the Government-Sponsored Entities (GSEs) Fannie Mae and Freddie Mac in the “Net Worth Sweep” (NWS), could be diverted to pay the Obamacare low-income insurance subsidies.

The record contained in the Treasury Department balance sheets shows through 2013 a direct diversion of the NWS into line items used to fund Obamacare.

After 2013, the Obama administration continued the NWS (ultimately confiscating some $271 billion from Fannie and Freddie), but the one-for-one diversion of the Fannie and Freddie funds going into line items used to fund Obamacare is less clear, suggesting Treasury grew more clever after 2013 in hiding the diversion within the Treasury general account used as a slush fund.

The House of Representatives filed a federal district court case against then Health and Human Services Secretary Sylvia Matthews Burwell to stop the Obamacare from diverting federal funds to pay the ACA low-income subsidies.

Judge Collyer decided HHS Secretary Burwell had no constitutional authority to divert funds Congress appropriated to one section of the ACA to fund Obamacare subsidy payments to insurers under another section of the ACA, Section 1402 – the clause defining the insurer subsidies – when Congress specifically declined to appropriate any funds to Section 1402 for paying the insurance subsidy.

“Congress authorized reduced cost sharing but did not appropriate monies for it, in the Fiscal Year 2014 budget or since,” she stressed.

The Obama administration appealed the District Court decision in U.S. House of Representatives v. Burwell to the U.S. Circuit Court of Appeals, deciding on its own authority that federal funds could continue to be diverted from other budgetary purposes to continue paying the insurance subsidies as long as the case was under appeal.

The point is that if the Trump administration simply decided to drop the Circuit Court appeal in Burwell, the District Court decision would become established law.

The result would be the Trump administration would be forbidden from diverting federal funds to pay the ACA insurance subsidies, with the result Obama care would implode.

“The Obama administration appealed the decision, but if the Trump administration were to drop that appeal, the subsidies would disappear,” commented Julie Rovner, Kaiser Health News, in an article published on April 9, 2017.

To revive Obamacare, Congress would have to pass a resolution funding ACA Section 1402, something even RINOs like Paul Ryan and Mitch McConnell might find politically suicidal to do.