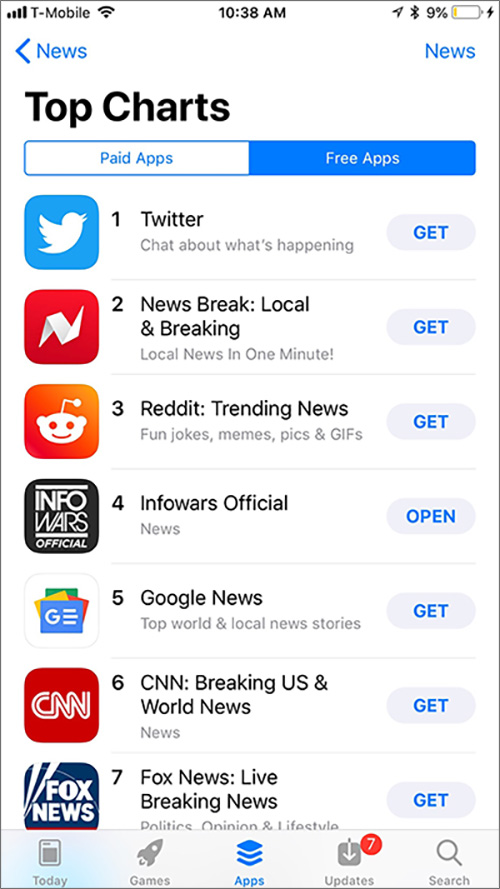 UPDATE: Infowars Official jumped to number 3 in Apple’s top downloaded news apps Tuesday evening, leapfrogging Reddit and putting it on track to soon be the number one most popular app.

We are now the number #3 app in downloads ahead of CNN, MSNBC, and the rest of the dinosaur media #infowarsban #infowars pic.twitter.com/bkFQJZAGbW

Get the app before it’s gone!

Downloads of the Infowars Official App have completely eclipsed the rest of the dying media’s own apps in the face of Big Tech censoring Alex Jones and his platform on Monday.

Well-informed and liberty-loving people alike immediately recognized the app is a direct line to Infowars and Alex Jones, circumventing the globalist tech gatekeepers who arbitrarily put conservatives under their boot of censorship.

Currently available as of this writing, the Infowars Official App is able to bypass the tried-and-true silencing tactics like shadow banning and putting a cap on view count.

Perhaps this is why CNN advocates removing our app from the store.

Apple and Google are still selling the InfoWars app, which contains some of the same type of content that both tech giants have pulled from elsewhere on their platforms https://t.co/GjaCGPjcu5 pic.twitter.com/oDwVU9vneP

Ironically, CNN’s Anderson Cooper tried to emulate Alex Jones’ live stream format, but it failed miserably and ended up being a multi-million-dollar dud.

Ben Warren and Jamie White contributed to this article.